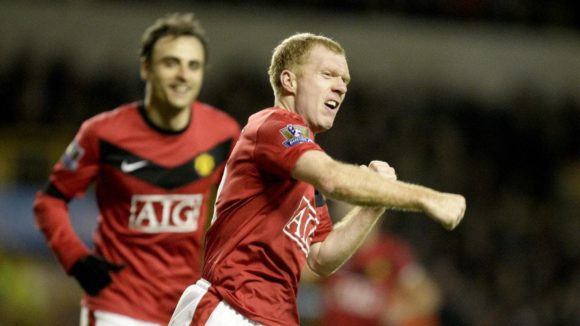 By Tim Opera
Millions of people watching Manchester United games today probably realise something is missing, they no longer have quality players like they did in the time of Sir Alex Ferguson.

If only they still had the talents of Paul Scholes, Roy Keane, David Beckham, Ryan Giggs, Gary Neville, and Phil Neville, but out of them all, Paul Scholes is the name that stands out.

Without any doubt, Scholes is one of the greatest players to have ever donned the red shirt as attested to by some of the people that know the nitty gritty of the game. By the time he hung up his boots at United, he had helped the club to win 25 trophies.

The touch, vision and quality that Scholes is best known for is exactly what Man United lack at the moment under Jose Mourinho.

Xavi called Scholes the best central midfielder he had seen in the last 15-20 years. Highly regarded for his sublime technique, Scholes was renowned for his passing range, clever movement and the ability to hit the net from distance. A versatile player, Scholes was used in the box-to- box, central midfielder role and even in the holding midfield position throughout his career.

Scholes was an integral part of United’s dominance under Sir Alex’s tutelage, it’s little wonder Sir Alex readily accepted his request to rejoin the team one year after his first retirement in 2011. In his first game back, an FA Cup tie against Manchester City, he ended the game on a high with a 97 percent pass completion from 71 attempts. It was like he never stopped playing. Such was his amazing talent and that was how he carried on till he hung up his boots for the second and final time in 2013.

The Red Devils could definitely do with a player like Paul Scholes at a time like this. The legendary midfielder made over 700 appearances at Old Trafford helping United to lift 11 league titles, three FA Cups and two Champions Leagues.