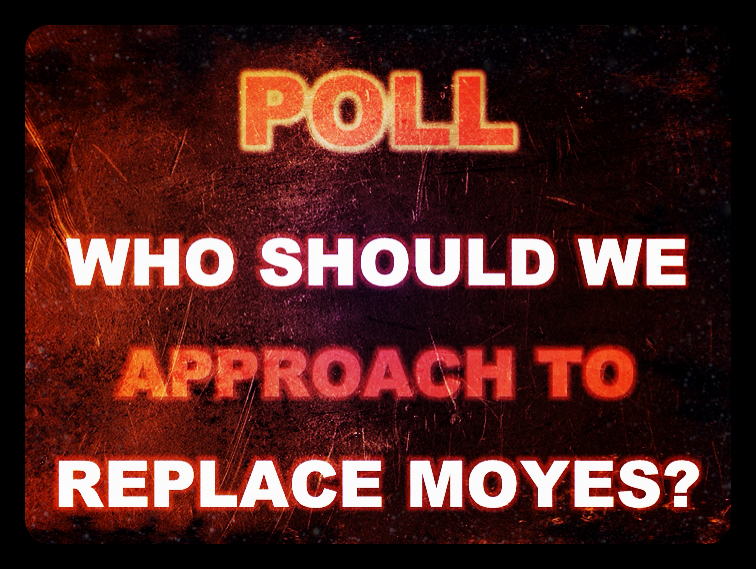 Rumors have been circulating in the USA this morning that Manchester United will announce the departure of David Moyes this week. I am not a religious man, but boy am I praying that this rumor is correct!

I don’t think I’ve felt as low as I did about United yesterday since that Denis Law goal for City  that sent us down to the old 2nd division 40 years ago.

Listening to Talk Sport, watching the news and reading other blogs has certainly made me realize that, finally,  the vast majority of United fans have had enough of Mr Clueless.

Fergie made some pretty poor signings over his 26 years, but surely Moyes will go down as his absolute worst. Along with failing to strengthen the midfield in the last few years of his reign, he didn’t exactly hand over the club in great condition. Ferguson must have known that we needed 5-6 new players to seriously compete in Europe and the Premier League, yet he nominated a man that had no history of signing world class players, a man that had never won a single trophy, a man that many top players around the world had probably never even heard of! So whilst I think Moyes is absolutely hopeless, I’ll admit he was probably given an impossible task.

Let’s be realistic – how can the Glazers possibly want to give David Moyes £100 million plus to rebuild the club, when so far in 7 months he has shown his total inability to manage the biggest football club in the world. If they do, they must be totally crazy and completely under Ferguson’s spell.

I cannot believe that the Glazer family will stick with Moyes past May; I hope he’s gone by Friday. I really don’t care who takes over until the end of the season as we have nothing to play for, so I guess let Giggsy take over for the last 10-12 games -he’s a true Manchester United legend and would be guaranteed 100% backing from the supporters.

The much bigger question is who should be the next long-term manager of United, who can bring the best players to our club and take us back to where we belong without delay. Have your say in our poll above.

I am undecided between Jurgen Klopp and Diego Simeone – I believe either would jump at the chance to manage United. Pep or Jose would be nice, but I doubt we could get either of them yet after missing out chance 12 months ago.

Please Mr Glazer, get a grip on this great club and relieve useless Moyes immediately.

3 thoughts on “When Moyes Gets Sacked, Who’s The Right Man to Replace Him? [Poll]”