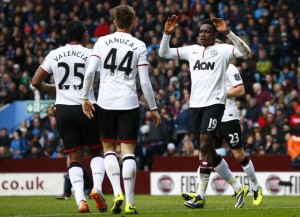 There’s been much talk with the catalogue of injuries to main team players that it’s time for their understudies to step up to the plate. Today though, Welbeck reveled in the responsibility of leading the attacking line as Robin van Persie starts his month on the sidelines.

Like many other United fans, I was not so enamored with Welbeck, a player with tons of potential that has seen him score 6 in 9 for England but only one league goal last season. Albeit out of position last season and this, when his chance to score goals that a good striker should have, he seemed to fluff his lines.

As man of the match, I thought he was inspired. Tireless in his running and hounding of Villa’s defense, even at the 80th minute he was chasing down Nathan Clark as he tried to clear out of defense.

His two goals taken with aplomb as a great striker should. First pouncing on Januzaj’s brilliant downward header after a sublime cross from Rafael that came off the post to fire in the rebound. His second three minutes later from a sprint into the area to slide in a perfect low cross from the also superb Valencia who was also inspired today.

Valencia and Rafael tortured the right side of Villa and after some very dodgy displays by Valencia; he for once looked the part we have not seen for a while. Even covering for Rafael while he foraged forward as they supported each other in a symbiotic relationship not seen when Smalling plays at right back.

The midfield was steady but would come under much more pressure from a top five team and Cleverly scored a lovely goal from a slide rule ball from Rooney, as he looked a little more like the Cleverly that showed so much promise in the reserves way back when.

The big bonus was to see Darren Fletcher back, who, as his form comes back with more games, will surely help us in the midfield. Rooney played deep and some of his Scholesque passing was sublime. In the first half he was spraying 50-60 year passes across the pitch while being creative leading the team forward and showed us what a we are missing. What a shame we can’t bribe him to stay there.

The only downside for me was Giggs, who’s passing was not of his best and I think is in need of a rest and Evra was allowing Villa to put in too many crosses on the left and even when he won the ball late on from El Hamidi, he immediately lost possession instead of clearing the ball and put the team under pressure again. Maybe time to allow Fabio to show what he can do.

All in all a revitalized performance that while wont win us the league, would surely put some confidence back in the team and with some winnable games over the Christmas period, we must surely see our rise up the table inevitable.