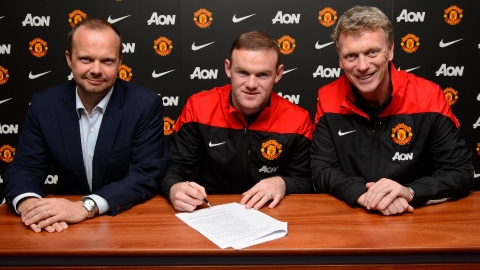 So Wayne Rooney has finally agreed to stay for a reputed £300,000 per week and probably the captain’s arm band next season. At the end of his contract, he will be offered a United ambassadorship.

Don’t get me wrong, I think Rooney is an exceptional player; he has dragged this under-performing team by its short and curlies for most matches this season, but he is approaching the wrong side of his peak. The economics of a £50,000 pay rise may work out cheaper than paying £40-£50million for a player of similar quality, but there are other Suarezs, Michus and Lallanas out there if we only took the time to look.

When I see the money Moyes is spending and going to spend, it worries me that our ‘war chest’ will be wasted by a manager unsure of how to use those players effectively, as we’ve already seen with Mata, Kagawa and Fellaini. Plus we still have the budding talents of Lingard and Powell to consider.

What about our dysfunctional defensive situation? We’re going to lose our captain Vidic, and Rio is all but gone. Will the defensive partnership of Smalling, Evans or Jones blossom? Will they ever compare to the likes of Pallister and Bruce, Stam and Johnsen or Vidic and Ferdinand?

Another player currently on Moyes whiteboard is Luke Shaw. I watched him last week against Sunderland in the FA cup and was not overly impressed with his performance, and yet he is valued at over £23 million at just 19 years old.

Ferguson found Dennis Irwin at Oldham Athletic, a division lower than United at that time. He was 25 years old and probably one of the best left backs we have ever had – not just defensively, but a wing back of speed and efficiency, and deadly with free kicks and penalties.

Start the rebuild by all means, but spending exorbitant money will not guarantee success, as United supporters have been telling Chelsea and City fans for years. Just ask Arsenal how their £42 million pound signing is working out!

Will we fall into that trap, with our academy used to farm out young players for small profit? Will the philosophies of Busby and Ferguson, nurturing young local talent, be lost forever?