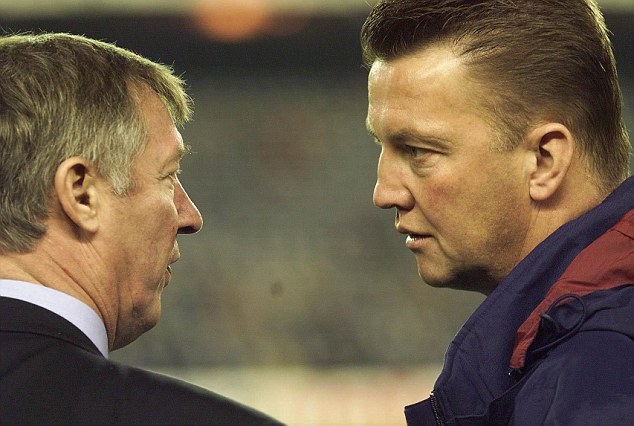 Louis van Gaal will be confirmed as the new Man Utd manager next week, according to reports from various sources, including the ever-reliable Ian Ladyman at the Daily Mail.

So what can we expect when the Dutchman takes over? Well, Edwin van der Sar says Van Gaal is the best manager he’s ever played for. That’s a pretty bold statement from our former keeper, but he’s a level-headed guy who usually speaks a lot of sense; as references go, it’s not bad at all.

Clearly, the player-manager relationship is a very personal one, and VDS’ comments are ultimately one man’s subjective view. Whilst I’m obviously bound to see Fergie as the world’s greatest, it’s encouraging to hear such high praise from someone like Edwin.

Van Gaal has won 7 league titles with 4 clubs in 3 different countries at club level. That’s a record of the very highest order. He boasts 2 decades of club management experience, with successes stretching from his first Eridivisie title with Ajax in 1993/94 to his Bundesliga trophy with Bayern in 2009/10.

His European successes are a somewhat more distant memory, the most recent being his UEFA Super Cup triumph with Barcelona in 1997 (he beat Dortmund 3-1 over 2 legs), and the most famous being his 1994/95 Champions League upset against AC Milan, where 18-year-old substitute Patrick Kluivert scored the only goal for an Ajax team with an average age of just 23.

Fergie’s total medal haul eclipses Van Gaal’s, and our departed patriarch also has a better recent record in Europe, but LVG has won trophies in Holland, Spain and Germany, and stamped his influence wherever he has gone. There’s nothing in his record to suggest he won’t do the same in the Premier League.

Van Gaal’s ego is notorious; his eccentricity the stuff of legend.

When he got the job as head coach at Ajax in 1991, he told the director “Congratulations on signing the best coach in the world.”

At Barcelona, he barged a 14-year-old Gerard Pique to the floor and told him “You’re too weak to be a Barca defender!”

And at Bayern, he dropped his kecks to make a salient, and unashamedly literal, point to his dressing room about the scale of his testicular fortitude. As Luca Toni later revealed, “Van Gaal wanted to make clear to us that he can drop any player from team. It was all the same to him because, as he said, he had the balls. He demonstrated this literally by dropping his pants. I have never experienced anything like it, it was totally crazy. Luckily I didn’t see a lot, because I wasn’t in the front row.”

This is a man who has a borderline-psychopathic level of self-belief that tends to accompany genius, a brilliantly off-kilter but always memorable sense of charisma, and that inherently Dutch tendency to cut out the bullshit.

His massive ego will inevitably chafe against those of some of our players, and he’ll no doubt make enemies in the media and in the dugout. But he will be the antithesis of the clueless, broken-record mumblings that came to characterise the Moyes misadventure.

Fergie’s ability to dominate the club and the discourses surrounding it was one of the keys to his success, and whilst Van Gaal’s personality is completely different, the strength of character and ability to set the agenda is something both men have in common.

Of all the managers we’ve been linked with post-Moyes, Van Gaal’s philosophy is arguably the closest to Sir Alex. He’s been educated in the traditions of Total Football, and he’s a firm believer in attractive, attacking play, generally favouring a 4-3-3 formation.

What were the alternatives? Mourinho’s bus-parking anti-football? No thanks. Guardiola’s possession-porn? That’s not really us. Klopp’s heavy metal? Maybe.

With Van Gaal, it’s all about the power of the unit – every player needs to act as one; responsibility must be shared absolutely. It’s about keeping the ball, but ultimately in service of the “moral duty to attack.”

If he gets the right players in, and the right backroom staff, he could give United a new, clearly defined identity. The tactics will be new, but the underlying philosophy will be a continuation of the Busby / Fergie dynasty.

A big part of that philosophy is also the commitment to youth, which Van Gaal has demonstrated to great effect throughout his career. As well as putting his faith in our academy products, we can expect him to leave our club in great shape when he steps down – he is likely to ensure that the infrastructure isn’t neglected, and that there is a coherent footballing identity running through all levels of the club. That legacy will be massively important for whoever succeeds him.

No appointment comes without risk, and whilst there is plenty to be positive about with Van Gaal, we shouldn’t expect miracles straight away. What we can expect is someone who speaks with passion and charisma, someone who commands respect, and someone who has a clear footballing style, fit for Manchester United. Is Van Gaal really better than Fergie? This is his chance to stake that claim.