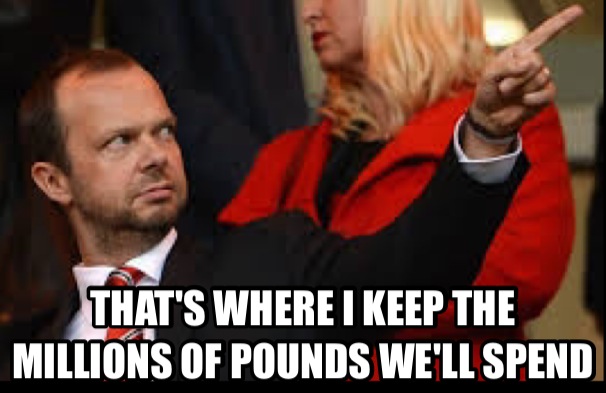 We are now days away from the closing of the transfer window, and yet again Woodward has so far failed to come up with the goods.

So what’s happening? Is it the manager’s fault? I don’t think so; all the indications are that Moyes and van Gaal both gave Woodward a clear list of targets.

It would be easy to blame the Glazers, but they have always come up with the funds when Ferguson asked, and have promised a strong kitty for this season

We can blame the flood of wealth in the game to some degree. You can lose a player for just a couple of million, as I believe United did this year with Vermaelen, but, to quote Gordon Macqueen (our erstwhile central defender from the seventies), “99% of players want to play for United, the other 1% are liars.” This cannot be said of today’s mercenaries.

As with last season, we are watching Woodward flail around the transfer market like a kid in a sweet shop with too much pocket money, but nevertheless failing to complete signings left, right and centre. Unsurprisingly, the rumours about van Gaal’s frustration grow louder by the day. We have signed Luke Shaw for £30m – a 19-year-old with very limited experience, and now injured due to the rigors of top-level training. Ander Herrera looks a decent signing, but otherwise there is little sign of activity, in or out.

The Marcos Rojo deal does look to be done – the player has already confirmed on Argentinian radio that he is a Man Utd player, but with the complexity around his ownership, the negotiations obviously haven’t been easy for Woodward. And even though the player himself has leaked the news of his move, our recent incompetence in the transfer market makes it very difficult to accept this as fact until the all-important 140-character confirmation from @ManUtd. Reports suggest this could happen tomorrow, but let’s just wait and see.

For weeks, we have been chasing Arturo Vidal from Juventus, offering players in exchange plus cash, but Juventus seem to be standing firm unless we pay a king’s ransom. There is also a question mark over Vidal’s injury issues… remember Owen Hargreaves?

Now it seems we are prepared to allocate £100m for Di Maria (it’s understood that figure covers the transfer fee and the player’s wages). Would this be a so-called ‘luxury signing’, or another panic buy? He’s undoubtedly a very good player, but that doesn’t guarantee success in the Premier League (Ozil, anyone?) He’d also need the right players around him to maximise his effectiveness and justify such substantial outlay.

So what’s happening? Dimitar Berbatov was destined for Manchester City but was hijacked by Ferguson and Gill at the last minute. The same fate awaited Van Persie – he was heading to Eastlands before United swooped and signed a player that made us a title-winning team again in 2012/13. Now, we are the ones being hijacked at every corner.

I think the best signing we can hope for is a new CEO who has experience in negotiating transfers, and maybe Van Gaal being more involved in bringing in the players he wants, if he’s not already. Ferguson was famous for meeting players personally or even driving them from the airport to assure them and their families this was the right club for them.

Woodward has brought in some fantastic marketing deals for the club. However, the latest Adidas deal, worth £75m, is subject to a 30% discount if we miss out on the Champions League two years running from now. He seems very capable of expanding the brand globally, but he does not seem to be able to get his head around the machinations of negotiating deals with overseas clubs.

Shaw came from a Southampton team that seemed ready to offload most of their talent, and Mata from Chelsea, who also wanted to jettison a player Mourinho felt he could do without.

I only hope that the situation is turned around soon, or we will fall too far behind. As in the 80s, we could become a team of good players that achieve very little, not to mention the hoards of plastic fans that will jump aboard the City, Chelsea and Liverpool bandwagons.

Let’s hope we see some major movement in the next week. If not, Woodward’s position is clearly untenable.

One thought on “United’s Transfer Paralysis: Who’s to Blame?”