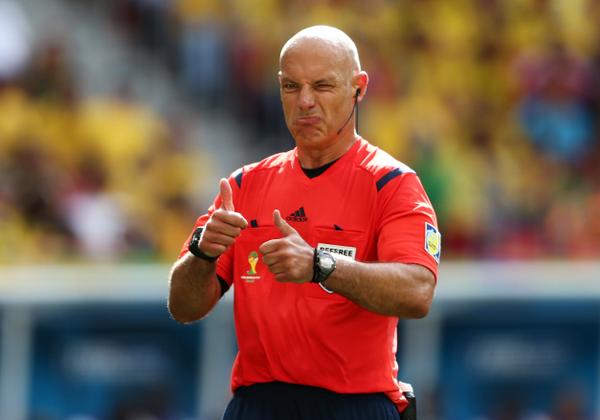 So, Howard Webb has announced his retirement from refereeing, and somewhat predictably, Twitter went into meltdown, with everyone eager to have their say on his departure.

With Webb’s deeply ingrained reputation as a pro-United ref, naturally most of the 140-character #bantz has centred on this theme.

@Furious_Fergie (a kind of poor man’s @evilkagawa) was quick to get in on the action, cheekily lauding the shiny-headed whistle-botherer as one of his “greatest signings”.

I see the wonderful Howard Webb has retired from refereeing. Very sad, he’ll be forever one of my greatest signings in football.

Then there was this picture of Webb spending more time with his ‘family’. Those Photoshop evening classes were all worthwhile.

Howard Webb: “I retired so I can spend more time with my family” pic.twitter.com/2AeNthLcsC

And this mock-up of a Webb statue outside the Sir Alex Ferguson stand also played on the notion that Webb was basically a United ‘legend’.

Even Rio got involved, re-Tweeting this quip about Webb following Vidic, Evra and Ferdinand out of the club. Always up for some #bantz and general all-round #murkage, is Rio.

But all the Webb-has-a-big-boner-for-United stuff did start to get a bit boring after a while, and some tried to silence the ill-informed cacophony of post-retirement trolling with good old facts. The stats don’t lie kids.

Some resorted to sarcasm…

Can every man and his dog please tweet a gag about Howard Webb and Manchester United please. I haven’t seen enough already #HowardWebb #mufc

I just can’t get enough of all this Howard Webb #banter. Really good work, everyone.

And some were a bit more blunt.

Then there was the obligatory meta-Tweet from @BeardedGenius. A gentle reminder that there are more important things to get annoyed about.

And finally, total indifference from @paddypower, perfectly expressed in an Alan Partridge GIF.