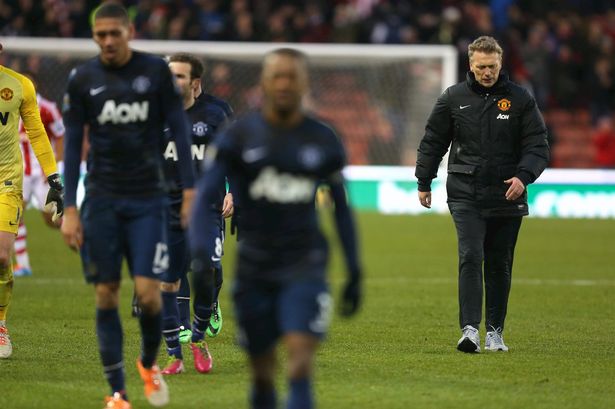 For a while, I thought Stoke were playing in our kit, as the kick-and-rush long ball football we were playing more closely resembled Tony Pullis’ Stoke of the last few years than the Manchester United of the last 30+ years .

From the first minute to the last, with the exception of a beautifully taken RVP goal, we were absolutely clueless today. It just gets worse every week, and whilst we all know Mata is a world class player, we have to hope that Moyes doesn’t turn him into Cleverley 2.0.

The defending, especially by Evra and Smalling, was Sunday League stuff, and Young and Cleverley were abysmal. When we suffered the two centre back injuries in the first half, Moyes brought on Welbeck, forcing Rooney to play further back, when surely the obvious choice was to bring on Fletcher (arguably our best performer in midfield this season!)

The players are not good enough – that’s an absolute certainty. Evra, Young, Cleverley, Welbeck, Smalling and Valencia are 100% not good enough for a top-4 side, and whilst Mata could prove to be a good buy, it was obvious if we were going to make a serious push for 4th that we needed other signings too.

Once again, Moyes and Woodward failed us in the transfer window.

Once again, it was frustrating to watch such inept tactics and lack of inspiration from the touchline.

Whilst I love United and want them to win every game whoever’s in charge, I am finding it hard to continue to support a manager that just seems so out of his depth, and is making us a laughing stock around the world.

We can pretty much forget a top-4 finish, and kiss goodbye to Champions League football next year. This is simply unacceptable, and the blame has to fall on the manager. My decision, should nothing change between now and May, would be to sack Moyes and bring in Diego Simeone.

Watching Moyes and his clueless crew on the sidelines at a windswept Britannia Stadium, totally unanimated and devoid of inspiration, was another agonising experience that all United fans will be desperate to forget. This is undoubtedly the weakest we’ve been for 30 years, and my fear is it’s only going to get worse.