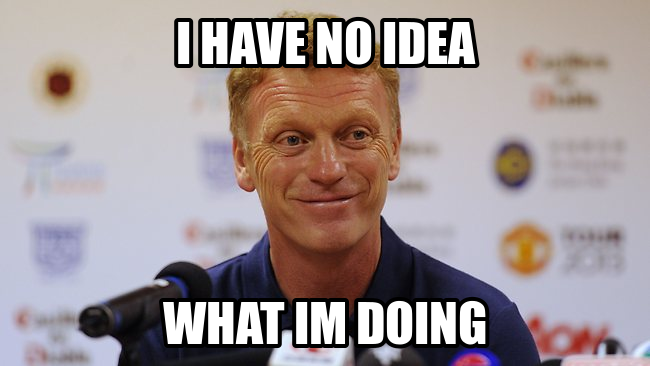 As you will have gathered if you have been following my blogs, I am no spring chicken. I have followed my beloved Reds for more than 50 years, attended my first Cup Final in 1963, the European Cup Final in 1968, went home and away during the drought of the 70s, before leaving UK and then regularly flying back for matches both at home and in Europe, including of course the 99 final at Camp Nou.

I honestly don’t remember ever seeing United play with the same lack of spirit and passion as I have witnessed so far under David Moyes. We have had teams in the past that lacked the quality or lacked creativity, but they never lacked passion. This team has no belief, no passion, and zero creativity. Whilst they may not be the greatest players in our history, they are certainly good enough to have thrashed Fulham yesterday. We can blame the players to some extent, but the bottom line is this is just very poor management by a mid-table manager.

The followers of our great club should remember very clearly: this man took over the champions of England, maybe not the greatest team to be crowned champions, but still THE CHAMPIONS. Everyone should stop comparing what Moyes inherited to Ferguson’s first United team. Ferguson took over a pub team in comparison to the squad he left for Moyes.

It’s really difficult to watch this abysmal, utterly predictable style of football every week. It’s obvious to everyone the tactics aren’t working, but Moyes stubbornly persists. Against Fulham, Ashley Young and Rafael continually lobbed useless balls into the box, rarely getting close to a red shirt. When he replaced the average-at-best Young with Januzaj, whilst the tactics didn’t drastically change, at least the deliveries improved.

Watching Moyes deploy Mata out wide on the right is beyond belief, and just reaffirms that no amount of money will be enough as long as he’s in charge. Fulham – the worst team in the league – had little trouble containing United, defending our record 81 crosses without too much fuss. In reality, if Fulham had taken their chances, they could probably have taken all 3 points.

Maybe Moyes thinks Champions League qualification is an achievement in itself, but this is Manchester United – not Everton, not Aston Villa, but the biggest club in Britain and arguably the world. Winning is what Manchester United is about; anything less is considered failure, and if you don’t think like that, you cannot succeed .

In reality, it’s been dire since the day he joined the greatest club in the world. The pre-season tour was nothing less than pathetic, and his business in the transfer market was a complete joke. If he was such a football genius and knew his ex-Everton players so well, why did he not attempt to sign Barkley, who is so obviously far more talented than Flopainni, and would probably have cost us less.

In January, he went for Mata instead of making a move for a strong box-to-box midfield player or a top class defender. In truth, we could have waited until the summer to see about Mata – with him not starting for Chelsea and probably out of the Spain team as a result, we might have been able to take him in July for closer to £20 million.

Why have United repeated exactly the same mistake post-Ferguson as they did post-Busby? We’ve appointed a man to succeed a GREAT that has no track record of success, dealing with the biggest players, buying the biggest players, or winning trophies. Clearly, that lesson was ignored.

I have been saying for a while that the man we should have given the chance to is Diego Simeone. Last night, I met a mad passionate football man from Buenos Aires. He follows River Plate and also follows United. I personally wasn’t aware that Simeone’s first manager role was at River Plate, where, in his very first season, he won the league. He then got snapped up by Atletico Madrid, and River Plate got relegated the following season.

It’s time for Ferguson to man up to the Glazers. He and Sir Bobby need to accept they got this appointment dreadfully wrong, accept that the next few months will be a depressing mess, and then appoint a new manager – hopefully Simeone – in May. Success might still take time, but at least Simeone would keep us entertained in the process, with exciting football played the Manchester United way.

Moyes, if you have any dignity, you will resign.

One thought on “No Spirit, No Passion, No Creativity, No Excitement”