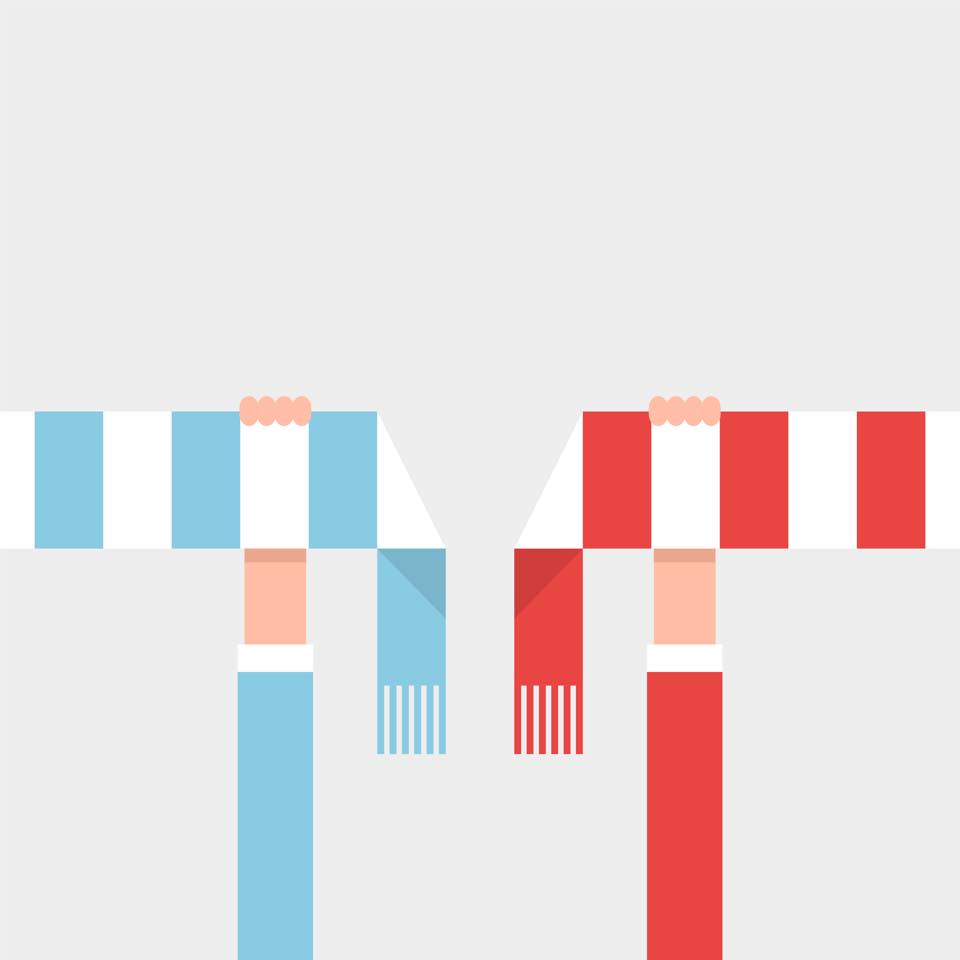 I certainly have never experienced such a unique build up to a Manchester derby. The vast majority of football ‘experts’ working for Sky Sports or various other websites, television channels and newspapers all seem to be predicting an easy win for City.

Fair enough, Manchester City have won the previous three meetings, winning both Premier League games last season by embarrassing margins. The derby is at the Eithad Stadium and United have yet to win away from home this season, while there are four points between the sides despite City having played tougher opposition (Liverpool, Chelsea, Arsenal and Spurs in comparison to United having only played Chelsea out of the top teams). All of this, in addition to the fantastic form of Sergio Aguero who has scored more goals then Van Persie, Rooney and Falcao combined, would indicate a City win, yet the same would have been said before their surprise defeat to high flying West Ham United.

Everybody knows anything can happen in football but West Ham’s terrific victory against last season’s champions was no accident and if Louis Van Gaal takes note from Sam Allardyce’s simple but effective tactics, then Manchester will most likely be Red come the end of the weekend.

The absence of David Silva (scorer of City’s spectacular consolation goal against West Ham) will be a big loss. Manuel Pellegrini may have been pondering the idea of playing an extra man in midfield and switching away from his favourite traditional 4-4-2 in a preventative measure to stop Manchester United from dominating the midfield. However, that seems unlikely now as Silva would have been the player to play in the hole behind Aguero and make up the numbers in the middle of the park.

Sure, Yaya Toure may play there, but he is a doubt for the match while his form this season has at times been appalling, plus it’s hard to imagine Pellegrini going so defensive at home with both Fernando and Fernandinho in midfield. This means that Manchester City will more than likely line up as usually with a traditional 4-4-2 a formation which could really play into United’s hands, provided Van Gaal switches back to the midfield diamond which served so well against QPR, West Ham and Everton (and not so well against Leicester).

Against West Ham, Manchester City were vastly outnumbered in midfield, resulting in Aguero and Edin Dzeko becoming isolated at times and lacking the cutting penetration that they usually bring to a game. The Hammers made terrific use of physical, energetic players like Morgan Amalfitano, Mark Noble and (even) Stewart Downing, which, in combination with the defensive security provided by Alex Song in front of the back four and the high pressing of Enner Valencia and Diafra Sakho up front, made it a very difficult and physically demanding game for City.

Van Gaal should take note and drop the physically unimposing Juan Mata (who ever since being dropped for the game against Leicester City has looked a shadow of himself) in favour of the equally small but far more tenacious and mobile countryman Ander Herrera, whose energy, work rate and defensive ability will be key assets to have in this match. And let’s not forget that so far he has, surprisingly, been able to match Mata’s efforts in front of goals this season (both players have two goals).

Choosing Herrera ahead of Mata would also allow the newly reinvigorated Marouane Fellaini to take up an advanced position where he is best suited and most dangerous, and could physically bully City’s defence, which certainly doesn’t happen very often. It would also allow United to exploit his stifling ability which was on display in the game against Chelsea, where he completely contained and dominated Cesc Fabregas. Having him available to do the same against Yaya Toure would be a huge bonus.

Since joining United, Daley Blind has gone from strength to strength, and utilising a diamond with him at the base would be the most efficient way to stop Aguero, whilst also making use of Blind’s passing ability.

This in turn would leave Angel Di Maria, our most creative and dangerous player, as the free man in midfield. Playing a deeper and more central position than he has in the previous two games would result in Di Maria having a greater effect on the game, as he would be able to constantly get on the ball and run at City’s defence or pick the perfect pass and pose a serious threat on the counter attack. Di Maria became far too isolated against both Chelsea and West Brom, resulting in his two least effective games in a red shirt so far. This was mainly down to his wide position where he drifted in and out of the game.

Playing a diamond would permit him to occupy the same position he played during last season’s Champions League final where he put in a man of the match performance. A similar performance on Sunday would surely result in a United victory.

Unfortunately both Radamal Falcao and Wayne Rooney are doubts for the game, which is disappointing as it may lead to Van Gaal continuing with the 4-1-4-1 formation which has yet to yield a win for United. However, Adnan Januzaj’s performance against Chelsea would indicate that after a run of poor displays the teenager is finally ready to recapture his form from last season. Van Gaal has previously stated that he sees Januzaj as more of a forward than a midfielder, which could mean United starting with the Belgian up front alongside Robin Van Persie, another player who looks as though he is ready to replicate his previous world class form. Such a strike duo, although not the best or most finely balanced, would still be deadly, very dangerous on the counter attack, and more than capable of scoring a couple of goals.

Trying to predict the team and tactics that Louis Van Gaal will deploy in any given match of high importance is usually a fruitless waste of time. But it is this writer’s opinion that if the following team is selected and all play to their potential then a United victory this Sunday would almost be a foregone conclusion.