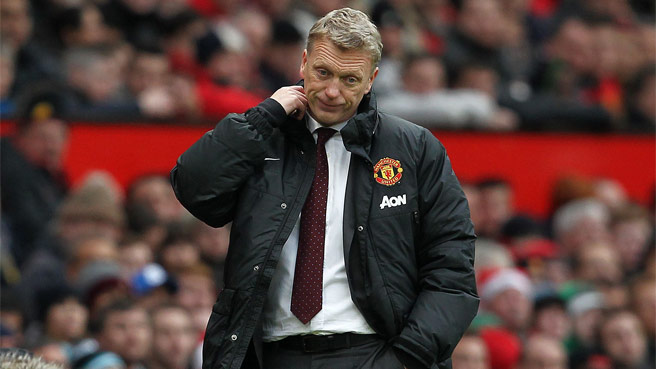 So far this season, we have played all the teams above us and around us in the Premier League once, except for Spurs, who we have now played twice.

Here’s a reminder of the points we’ve picked up against those teams:

That’s a measly 6 points out of a possible 27 against the other top 8 teams in the league!

There were muted boos when Howard Webb blew the whistle for half time with Man Utd 0-1 down on New Year’s Day, and by the end of the defeat against Spurs, even before Moyes vented his post-match anger, it felt like the crowd was more disillusioned with the referee than the man in the dug-out.

But surely, after our 4th home defeat of the season, it’s time to once again ask whether Moyes is the right man for the job. Against Tottenham, the tactics felt painfully predictable, with positive, attacking substitutions making little difference to the shape and rhythm of the play.

With nauseating repetition, we pumped the ball out wide, before crossing it into the box without really creating a chance. The only reason we got 3 points against Arsenal was that they had an off day, and we pressed them high up the pitch.

I hope Ole does a great job at Cardiff and, if he does, I’d welcome him as our next manager in a couple of years. Moyes’ brand of football is not Manchester United – we’ve got the width but none of the wiliness that marks a trophy-winning team.