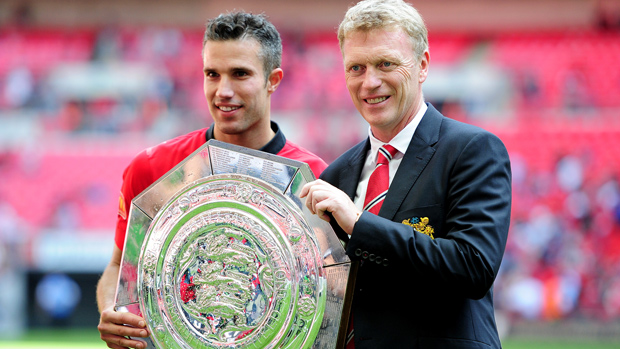 RVP has today come out and publicly supported under-pressure manager David Moyes, saying “Moyes needs time, he’s new, the manager is our leading man and he will change things around.”

RVP has stated that Moyes has guided United to the last 16 of the Champions League and the semi-finals of the Capital One Cup. Although we’re languishing 7th in the league, a win on Sunday at Chelsea would surely give huge belief to the squad. Stranger things have happened!

The chances of us retaining our Premier League crown are impossibly remote, and I’m pretty sure most Reds would take a 4th place finish right now.

Van Persie, who has been side-lined for a month with a thigh problem, is very confident United’s fortunes will improve “sooner rather than later.”

“We lost too many points this year, but we are doing everything we can to change that”, said the 30 year old Dutchman

Van Persie was signed from Arsenal for £24 million in August 2012, and was a major factor in United claiming back the Premier League title, scoring 30 goals in all competitions, with United winning the 38th trophy under Sir Alex’s reign.

RVP said that Moyes was surprised at the lack of celebration following the 2-0 win over Wigan in the Community Shield, with RVP stating “we are used to winning, it’s a normal day at the office.”

This is what DM needs to get to grips with – winning and Manchester United go together like chips and gravy. It’s simply what’s expected by the players, the fans and everyone associated with the club.

I think it’s positive that RVP has come out and publicly backed DM. We all want him to succeed, but we also don’t want to be the next Liverpool and spend 20 years in the wilderness, so he has to get it right.

The big question will be, if we don’t finish in the top 4, will the owners be willing to give DM the funds to trust his judgment on players to get us back in the top 4? In my opinion, they will most likely give him another season with money to spend in the summer. His biggest mistake, which could ultimately cost him his position, was panic-buying Fellaini for such a ridiculous sum of money.

Let’s get behind DM and the boys, and believe we can pick up 3 points on Sunday. Oh how that could change our season!