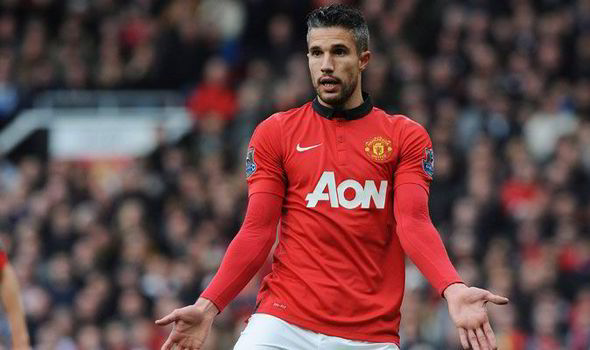 What a signing Robin van Persie was in the summer of 2012. We were still getting over losing to the noisy neighbours by goal difference and twenty seconds, after throwing away the 8 point lead we had by Easter.

With a deft touch, Fergie managed to prize away Arsenal’s top player, who revealed that even though City wanted him and offered more money, in his heart, the little child inside told him United is where he wanted to be.

What a glorious season he had – 26 goals and some sublime finishes as he lived up to his reputation as one of Europe’s top goal scorers. Even his injury worries seemed to be behind him.

Then the bombshell hit with Fergie’s shocking, but not unforeseeable, retirement. In came Moyes, with his antiquated training regime and a backroom staff with no experience of coaching such a high profile club. RVP not only lost Meulensteen, who was not just a superb modern coach, but also a close ally and compadre.

What a different player RVP looks right now. His lacklustre performances, his long injury lay-offs, and his complaints to the Dutch press and any countrymen with a sympathetic ear.  He has since backtracked, saying his comments were taken out of context, having expressed his discontent at not only the training methods, but also how other players are stealing his positions and he can’t find any space.

Watching him at the Hawthorns yesterday, apart from the glorious cross for Jones’s goal, I saw the demeanour of a disillusioned player. Am I the only one who noticed that when Mata sent in a second half free kick into the area, RVP quite literally jumped onto Rooney’s back, throwing him to the ground, to try to reach the flight of the ball.

By the hour, he was lucky not to be sent off, but maybe that was his intention. Otherwise, why would you lunge two footed into a player after already being shown a yellow card? Yes, he managed to get a toe to the ball first, but most refs these days would have sent him off for dangerous play, albeit no intent to injure.

In one of Moyes’ best decisions as Man Utd manager, he brought the hot-headed van Persie off and brought on Welbeck, a move reminiscent of Fergie when he brought off Scholes against Arsenal when he was battling with Wilshire in midfield. Both were booked, but continued to play with aggression, so Scholes came off, Wilshire didn’t, and the Arsenal man was duly sent off moments later. Arsenal lost the game.

We’ll have to see how it plays out, but yesterday’s stats show that Welbeck passed 3 times to Rooney in 27 minutes, who looked far more comfortable with Welbeck than van Persie, who passed to Rooney just once in 63 minutes. At the moment, this dream strike partnership just can’t get on!