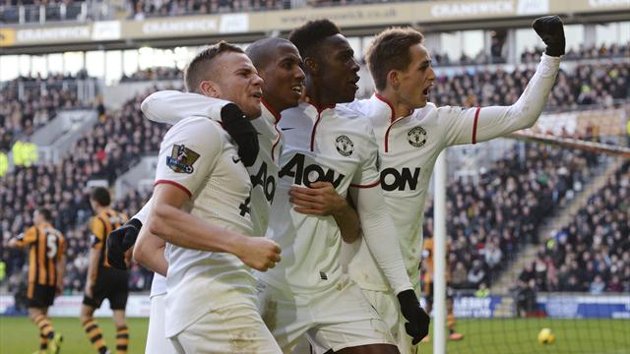 Although we looked like Real Madrid in kit, we didn’t start off like them handing Hull a two goal start. As Fergie used to say, we never do it the easy way! First goal was a shambles considering Cleverly never touched Elmohamady’s wayward cross that was so askew, the linesman (that’s assistant referee to those new to the game), must have assumed it did and gave a corner. Rooney lost his man in James Chester who ran onto Alex Bruce’s header and knocked in from 3 yards.

The second, another comedy of errors as the ball pin-balled around United’s area and as Meyler swiped at the ball that Evans kindly gifted him, De Gea dived to his left and had the ball covered when Evans stuck out his left boot and diverted the ball away from the extended body of De Gea much to his and the fans chagrin.

Considering we have all been scratching our heads about the appointment of Moyes, I have to say that his decision to bring on Januzaj for the injured Rafael and move Valencia to right back was a game changing decision when the defensive way would have been to move Smalling to right back and bring on Vidic, so well done Moyes, you’re learning!

Within minutes of coming on, Adnan won a free kick on the right flank and Rooney delivered a beautiful curling ball into the area which easily found Smalling’s head from a standing leap and flew into the bottom right corner.

United’s equalizer came from a one two with Welbeck who’s return pass was not great but Rooney scooped up the ball and let fly with a stunning volley that swerved and curled before smashing past McGregor’s outstretch hand. That goal now makes him second highest scorer for one team in the Premier only being topped by Henry, praise indeed.

Although Chester was unfortunate to concede an own goal from Young’s excellent cross from the right but it was such a good cross, Rooney would have scored if not for Chester’s erroneous intervention and was the well deserved winning goal.

Fletch was steady and economic and even had a shot at goal before being replaced by another attacking decision to bring on Hernandez who made a nuisance of himself but little else.

All in all, a decent performance against a stuborn Hull side who had only conceded three goals at home all season. Rooney needs no more compliments from me but what was Valencia thinking to get sent off with a minute to go. I think Moyes needs to reign in the ill discipline from a few players that showed today, but three points well fought for and nice to see that fighting spirit return.