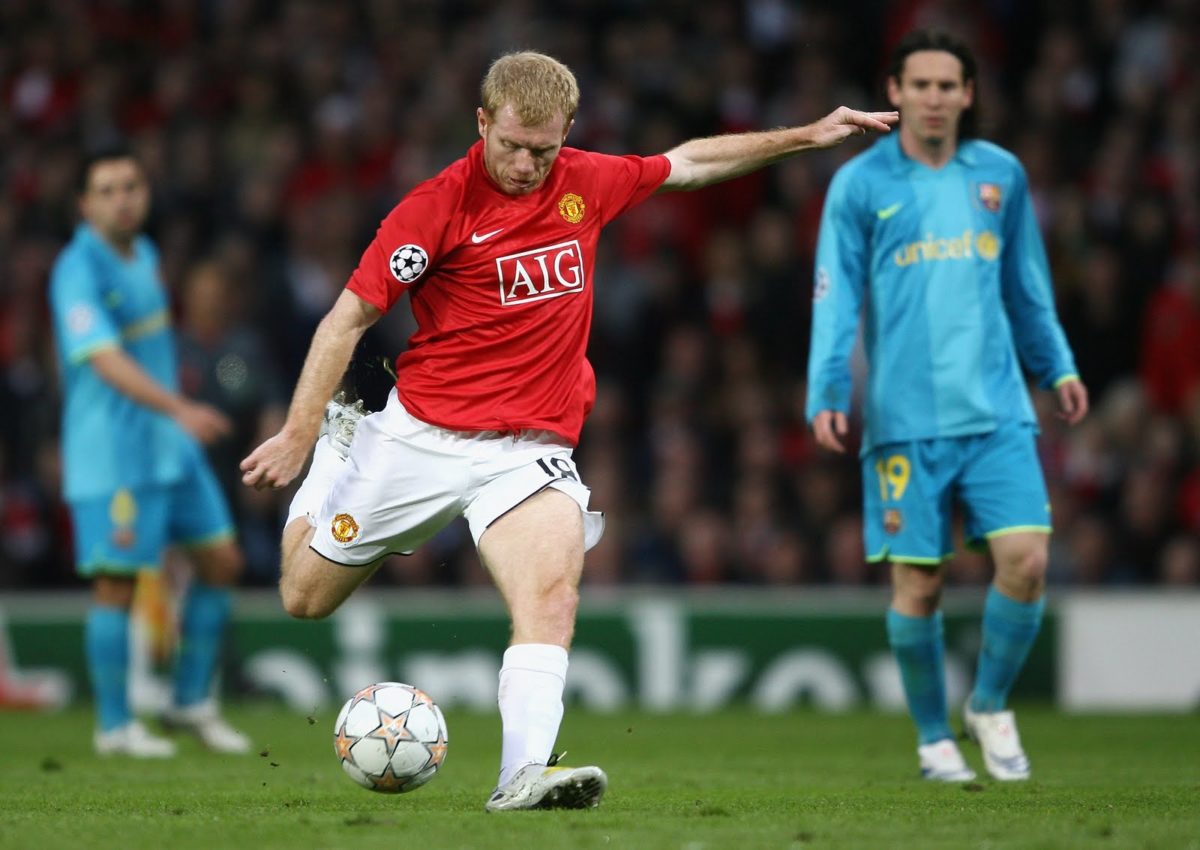 A few months ago, four of our writers picked their all time Man Utd greatest 11. Scholes was the pivotal player at the centre of three of those fantasy teams; one of them featured, instead, Duncan Edwards, who died at just 21 in the Munich disaster. According to Bobby Charlton, “had he lived, he would have been the best player in the world.”

For me though, as a fan born in 1985 – a child of the Fergie years – Paul Scholes has always been the player I’ve felt most privileged to watch, and the player whose departure from the team I have lamented the most. Yes, it was amazing watching Cantona as a kid, and witnessing Ronaldo’s transformation from dodgy-toothed showpony to freescoring global superstar was quite an experience too, but Scholes was always the one I admired, and perhaps related to, the most.

His shyness, which he does seem to have overcome incredibly fast following his retirement, was always endearing, and as a short, ginger kid myself, I was quietly delighted when my cousins – who took me to many of my earliest games – decided Scholesy was the nickname for me.

Scholes was emphatically capable of moments of individual brilliance, and provided many a match-winning thunderbolt from the edge of the area over the years, but it was his ability to anchor the team, dictate the tempo and knit the play together with in that sublime, uniquely Scholesian style that made him such an great player, and such a joy to watch.

Scholes Summed Up in Seven Sentences

His positioning was flawless.

His touch was delicate and deft.

His technique was godlike.

His reading of the game was unmatched.

His vision was glorious.

His range of passing was verging on ridiculous.

And his tackling – we’ll all miss that.

Scholes has often been cited by other players as one of the game’s greatest midfielders, if not the very best. Here are some of my favourite quotes:

(Thanks to MUFCfans.com for the images).

If you’re feeling as nostalgic as I am, then be sure to check out this great YouTube tribute to Scholesy as well…

Or Scholes and Neville getting laughed at during media training in their youth team days?

Or Carragher and Neville debating Gerrard vs Lampard vs Scholes on Monday Night Football last year.

Will we ever have a better central midfield than Roy Keane and Paul Scholes? There’s been a deluge of nostalgia since Fergie’s retirement and the end of the Class of 92 era, and at United we should always be looking forward, but today, let’s just celebrate one of the game’s most remarkable talents.

Thanks for everything, Scholesy.