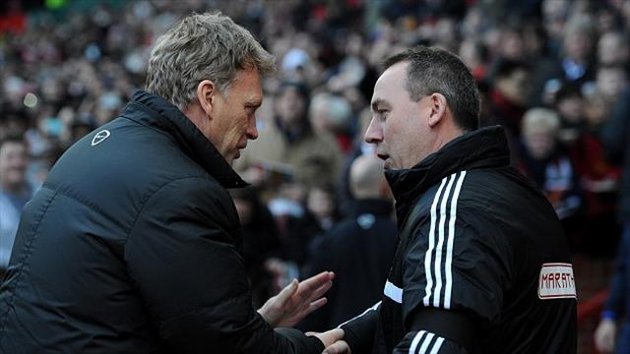 There was a kind of poetic justice in watching the satisfied gleam in Rene Muelensteen’s eyes as the final whistle blew at Old Trafford yesterday.

A coach of great talent who was well-liked by the players, and unceremoniously dispatched by Moyes, in his effort to be his own man. You know what David, be your own man in your own time, not on ours.

Mourinho was commenting on West Ham’s nineteenth century style of play last week. Well, here we are, it’s 2014 and we’re playing 4-4-2, sending in 46 crosses in the first half alone with a total of 82 crosses over the whole 95 minutes. Just 18 of those crosses found their mark, and none of them resulted in a goal.

To quote Muelensteen,”When I saw Manchester United today I thought the gameplan was quite straightforward — get it wide, get it in, whether it was from the full-back pushing on or the supporting wide man and midfielder. They put crosses in from wide angles from outside the box. We defended it well.”

Defend well they did, and I would wonder whether we should make a bid for 6’6” Dan Burn, who was a tower in their defence. You can’t blame a struggling team coming to Old Trafford to try to gain something; it’s just gotten a whole lot easier under David Moyes’s stewardship.

The comment of the day came from Gary Neville, who said of Sidwell’s first half strike, “United lost a goal to a team not even set up to score”.

As usual, only when Januzaj came on did we begin to look dangerous. His twisting and turning, and clever threaded balls into the area, showed we can attack on the ground instead of unrelenting aerial bombardment.

Mr. Moyes, now you’ve realized the job is bigger than you thought, maybe you should consider your position and get back to where you feel comfortable. Obviously that won’t be at Everton, who are blossoming under Martinez, suggesting it was your tactics that were holding them back.

Laudrup is out of work – as with Chelsea last year with Benitez, why don’t we give him to the end of the season to see if this once great player and winner of medals can help to at least guide us to the Europa League?