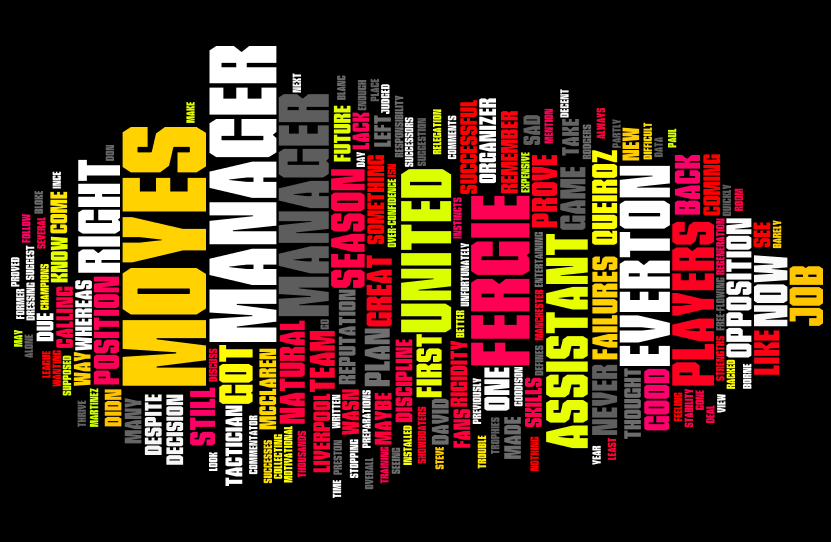 I still remember when I first heard of David Moyes. It was around 2001 when Steve McClaren left his post as Assistant Manager of United, having built a reputation as an organizer and tactician to complement Fergie’s incredible motivational skills and man-management. Moyes was an up-and-coming manager at Preston with a great reputation and was someone that Fergie fancied to come in and work under him, with a view to him growing into the manager’s position. And he was Scottish. Sounded like a good deal.

When Moyes rejected the job, wanting to prove himself as a manager in his own right, I was disappointed, despite knowing very little about him. But I still remember when he got the Everton job, where on his first day he got rid of expensive old showboaters like Paul Gascoigne and David Ginola, that maybe he would be one for the future.

His spell at Everton confirmed this, despite his lack of trophies. He dragged a team of relegation scrappers out of trouble and quickly placed them ahead of Liverpool and into the Champions League, giving them stability and making Goodison an attractive place for new signings. Trophies or not, it’s obvious why Everton fans were sad to see him go when United came calling.

Back in 2002, we plumped for Carlos Queiroz, another great organizer, tactician, and disciplinarian at the training ground. Our expansive style of play in those years was partly due to the discipline and rigidity he installed in our defense, even with a slowing Laurent Blanc at its heart.  Fergie’s attacking instincts and free-flowing, entertaining football were able to thrive because we were still tight enough at the back to win games that way.

I thought Queiroz was being primed to take over from Fergie, but when retirement #1 was called off, it was natural that he would look elsewhere to prove himself. And so, so many other “natural” contenders for Fergie’s position fell by the wayside due to their own high-profile failures, borne out of the over-confidence and ambition that saw them so successful as players. Whereas once Hughes, Bruce, Ince, Robson and several other former players, not to mention McClaren and Queiroz, were natural successors to Fergie, they have all racked up too many failures for United to come calling now.

And so we were left to choose a manager who perhaps was not judged on his successes, but rather his lack of failures (and maybe his Scottish-ness…) Unfortunately, all the skills that would have made Moyes such a good Assistant Manager to Fergie, and which made him a successful manager at Everton, proved his downfall when given sole responsibility at United. A commentator at the Everton game mentioned one of the Everton players claiming that, whereas previously Moyes’ preparations for a game would focus thoroughly on stopping the opposition, now under Martinez they barely discuss the opposition, instead focusing on their own strengths and the damage they could do. And I thought: isn’t collecting data on the opposition what the Assistant Manager is supposed to do? The organization, rigidity, discipline on the pitch, all the things Moyes is known for, have always seemed to me the Assistant Manager’s job, while the Manager defines the overall philosophy of a team. Surely when it comes to the team talk before the game, it should be about us and not them. We are Manchester United after all.

We don’t know what really goes on in the dressing room, but clearly something wasn’t right. The players weren’t performing. The attitude coming off Moyes in his comments never inspired the fans, let alone the players. The whole feeling was off. Thousands of words have been written about what went wrong, but all I can say is: something wasn’t right.

Ultimately, this was a sad decision to have to make, but the right decision. Moyes seems like a decent bloke and will be a good manager in the future. But whereas Brendan Rodgers didn’t have a great first season at Liverpool last year, you could at least see a plan forming, a regeneration, an acceptance that a difficult season would be necessary to pave the way for the success to follow, as they are seeing now. With Moyes, I never got a hint of that plan. There is nothing right now to suggest that next season will be better than this one, other than a new manager coming in. It’s been a waste of a season. Worse, we have gone backwards, but with no suggestion that there is any plan to move us back into position.

What a shame he didn’t just take the job back in 2002. We’ll never know what might have been. Moyes may well have been the greatest Assistant Manager that United ever had. Trouble is, he was the manager by the time he got to prove it.