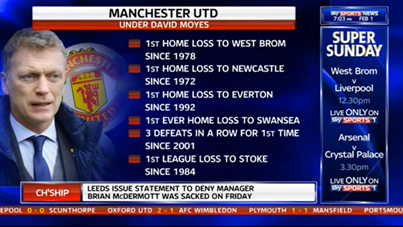 As another weekend nears its end, we have another laughable defeat to reflect on. Once again, Moyes insisted we were the better team, and bemoaned United’s bad luck. He’s not just breaking records – he’s a broken record, and it’s really starting to grate.

How can the board, and even the Glazers who know nothing about the game, not see he has no clue how to manage tactically at this level? His way of playing the game is so emphatically mid-table and out of date compared to the tactics of today’s top teams. I don’t think it will matter how much money the Glazers are willing to invest; with Moyes as the coach, it will just be a waste.

We would be better off paying out his contract, and bringing in a modern footballing coach like Diego Simeone, who, like Fergie did in Scotland, may even break the Real / Barca stranglehold in Spain this year. His Atletico Madrid team play football the Man United way, whilst we look more like a mid-table outfit content with securing its place in the Premier League for the coming season.

No one is pretending that Moyes didn’t inherit a mediocre squad, but the difference is that Fergie made average players do amazing things, whilst Moyes makes our best players look ordinary. Fergie may have left United knowing his squad lacked quality, but his two biggest mistakes over the past few years were to let Pogba go and choose Moyes as his successor. Those two decisions have had a huge bearing on the position the club finds itself in today.

After yesterday’s defeat at Stoke, Moyes repeated claims that have already become familiar to the point of cliché: we played well, we were just unlucky. All these comments do is confirm exactly how low his standards are; in truth, we were appalling and totally devoid of any ideas. He brought on Danny Two-Left-Feet Welbeck when it was obvious to everyone that Fletcher was the right sub to make. His pitifully low standards, and poor decision making, are taking Man Utd backwards.

To add insult to injury, Wilfred Zaha changed the game for Cardiff yesterday – Solskjaer introduced him seven minutes before the break, and he went on inspire their comeback. It’s a shame that Moyes obviously doesn’t rate him, or maybe it’s just because his daughter rates him a bit too much.

United are in need of a serious overhaul, from the manager to the playing staff. It’s scarily reminiscent of the post-Busby days, and until the owners and the board can accept Moyes is most definitely not the man to take us back to winning ways, we will have to get used to losing at places like Stoke and Sunderland, with Moyes continuing to break records that none of the fans will be bragging about.

Would a single Everton fan or board member want him back at Goodison? Would any of the top four hire him? We all know the answer to those questions, so how can the United hierarchy seriously think he was the right choice to continue bringing trophies to our beloved club?

Why give him millions to spend and delay his inevitable departure, then spend millions more with a new manager? Let’s say farewell to Moyes in May, and give the right man the money to rebuild the greatest club in the world.