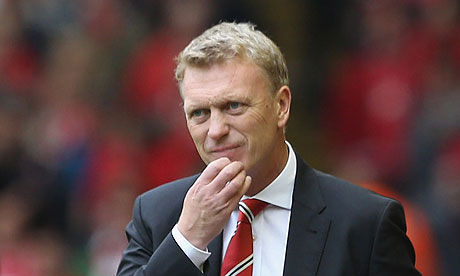 I read this morning that Moyes has insisted that the world’s best are still forming a queue to join Man United.

We have needed a talented, creative central midfielder for two or three years now with none signed. All we got was Fellaini, who Everton certainly don’t seem to have missed.

While United have chased players that wholeheartedly turned us down this summer (Fabregas, Bale, De Rossi and even Ronaldo), Chelsea just signed Matic in the blink of an eye for £20 million.

We signed a talented young winger in Zaha, and he’s paid £30,000 a week to mostly warm the bench, while Valencia continues his difficulties in crossing a ball consistently into the danger area, and Nani is injured. Look at Sterling at Liverpool, and how he’s come on with time given on the pitch.

Koke, another Moyes target, is being approached by Barca. Will he go for money or the prestige of playing with the likes of Messi, Neymar, Iniesta and Alonso? Then there’s Cabaye at Newcastle. Have we made an approach? Will he soon be on his way down Sir Matt Busby Way? If we keep approaching our targets at such a snail’s pace, it seems like we’ll always lose out on the best players.

It’s going to be difficult enough to sign top players with the finances that City and Chelsea have, as well as Real and Barca, but we have to rebuild our reputation again, which doesn’t look good at the moment, with poor managerial and board decisions.

You’ve a very difficult job Mr. Moyes but you knew that. However, blurting out ridiculous quotes to newspapers will not help you or the team. An old friend once told me, “Talk is cheap; it’s money that buys the whiskey”. Buy them first, and then tell us how they queued to join us.