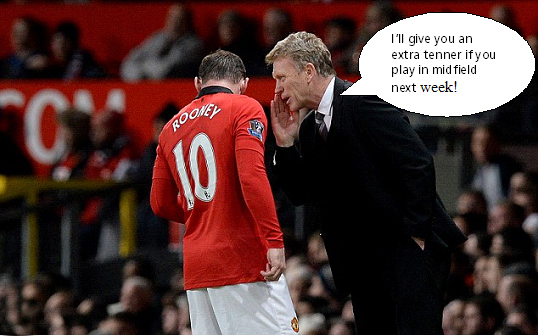 I read this morning that Chelsea, Real and Barca are still interested in signing Wayne Rooney. By next season we’d be lucky to get twenty million as he will have one year left on his contract. Imagine we paid twenty eight million for Fellaini, what is Rooney’s worth?

To hear that Woodward doesn’t feel it necassary to open discussions with Rooney’s people just yet must send a shiver of worry down every United fan. In all probability, the ogres of the truimvate who will vie for Rooney’s sevices are probably already sharpening their pencils to offer world beating salery and bonuses to our talisman and who would blame him if he leaves.

In 2010, he wanted to leave, although misguidedly to go to Etihad, because he felt that United’s ambitions were deteriorating and with the only one world class player signed since Van Der Sar, (RVP, 30) how wrong was he in seeing the writing on the wall. Can we count Jones, Smalling, Kagawa, Zaha as world class, has De Gea proved he can be the next Schmiechel?

Rooney is a rarity in the English game littered with average players. A workhorse, visionary in passing, goalscorer and brute of player who would die for his team. Come on Moyes/Woodward, get him a midfield general who would release him to do what he does best and get him a world class extended contract that this world class player deserves.