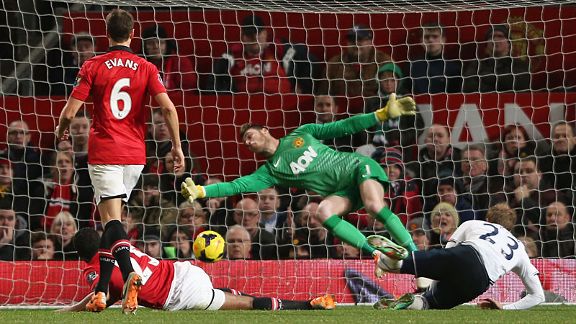 I don’t know if we were hung over, but the performance this evening was as horrible as it’s been lately. I think it goes to show that Ferguson managed to get a team of above average players with a smattering of world class names, and turned them into champions.

Gone are the days when we were losing 1-0 at half time, and knew that Fergie would put it right – he’d batter them in the dressing room and we’d turn it around. Spurs must have been surprised at how comfortable they were, even with only 30-odd percent possession.

I have said before that Valencia is fast becoming a liability. If your wide man cannot cross into the area, what use is he? As soon as Januzaj took his position and Valencia moved to right back, the game changed. An eighteen year old who turned Danny Rose inside out and not only delivered the ball for Welbeck to score, but provided so many useful crosses.

Gosh, we couldn’t even get a break from our so-called biggest fan, Howard Webb, when Lloris upended Young! Things are really getting bad.

It’s sad how far we are falling, the Theatre of Dreams fast becoming a nightmare for the seventy odd thousand that come to watch. Beaten by a semi-decent team with a rookie manager – not a good start to the New Year and we’ll be lucky to make the Europa League this season, which is not such a bad thing with its crushing fixtures.

Happy New year to us all!