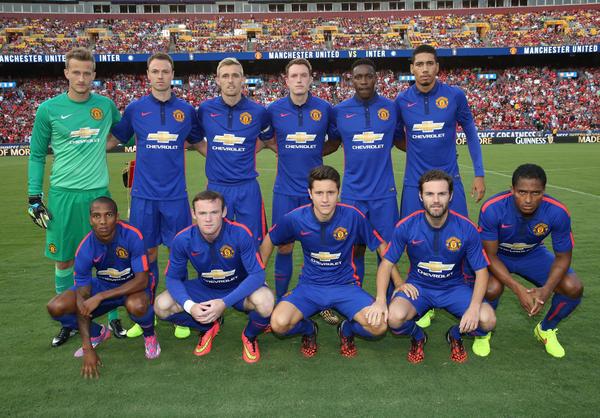 On the evidence of the team photo above, the bromance between Juan Mata and Ander Herrera is blossoming quickly. Just look at those affectionately-placed hands!

Their interplay was at the centre of the 22-pass, Barca-esque move United strung together against Inter Milan, and with a history of playing together for the Spain Under-21s (they won the U-21 European Championship together in 2011), this could be a key relationship for United, both on and off the field.

Remember when Herrera posted “See you soon my friend” on Instagram back at the beginning of July?

After Herrera’s impressive debut in the 7-0 win over LA Galaxy, where he was named Man of the Match, Mata said:

“He did great. I know him very well from our days with the Spanish national youth teams and he was very good tonight. I am very happy for him. We have a good connection on and off the pitch and I think he will give us a lot of good things this season.”

Elsewhere, Mata has described Herrera as “a good guy, my friend,” who he has known since he the age of 15.

Writing in The Independent on Wednesday, Mark Ogden noted:

“Herrera has been more impressive than many had expected in United’s two tour games, demonstrating that he can comfortably operate slightly deeper, building the play and freeing up the No 10 role for Mata. Herrera has the vision to know where his pass is going before he receives the ball and has looked a tougher player than Mata, capable also of breaking up play. He is a tough character, too.”

The Mata-Herrera axis could be a key to United’s success this season and beyond. The real question is who is best suited to partner Herrera in the centre in a first-choice 11? Could LVG help Cleverley prove the haters wrong? Could Fletcher make a remarkable return to his all-action form of old? Is Carrick the right man for the job? Or will we manage to do a deal for Vidal, Strootman or someone of that ilk?

The clock’s ticking, so we’ll have our answer soon enough. Whatever happens, it’s brilliant to see Herrera settling in so fast, and with LVG seemingly determined to play Mata in his best position, our two most recent Spanish acquisitions will surely be central in United’s efforts to reassert themselves in the Premier League.