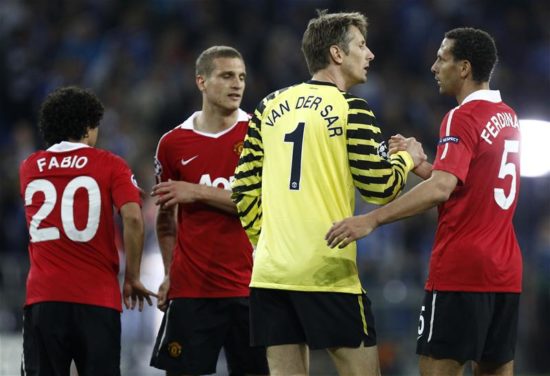 He may be the CEO of Ajax today thanks to his links and status at the club, yet he is equally regarded as a Manchester United legend.

Edwin van der Sar, in his playing days, was an epitome of goalkeeping. Even before joining the Red Devils in 2005, he was already a legend of the game. When he would decide to quit the game in 2011 at 41 years of age, van der Sar had won 27 titles in all – majorly at United and Ajax.

As one of the most successful footballers to ever play the game, Edwin van der Sar featured in arguably the greatest United side between 2005 and 2011. This was a United team featuring Wayne Rooney in his prime, Cristiano Ronaldo, Carlos Tevez, Nemanja Vidic, Rio Ferdinand, Paul Scholes, Ryan Giggs, and more.

The Dutchman played his last game for United in a UEFA Champions League Final against Barcelona which the Red Devils lost. However, the match was never going to cloud the achievements of a legend who recorded a world league clean sheet record in the 2008/9 Premier League season having not conceded a goal in 1,311 minutes.

His 130 appearances for his national team made him the most capped player for the Netherlands until Wesley Sneijder took the title in 2017. At 40 years and 205 days, van der Sar became the oldest player to win the EPL, and has been named the best European Goalkeeper on a number of occasions including 1995 and 2009.

One of the highlights of his career came in the 2008 UEFA Champions League Final in Moscow against Chelsea. The two teams had played a 1-1 draw for 120 minutes. It was time for the knockout. Cristiano Ronaldo had seen his penalty kept out by Petr Cech. United were not in control of their destiny anymore. Fortunately, Chelsea captain John Terry missed a penalty of his own which could have been the last kick of the night.

At this stage, both teams were on par. Every other kick taken after the Terry miss was going into the net until Anelka. The Frenchman placed his kick just right, but van der Sar would keep it out and win the trophy for his team. If he was a legend before that night, he became even greater.

The thought of Edwin van der Sar brings profound memories to United fans all over the world. He is a legend all on his own terms.