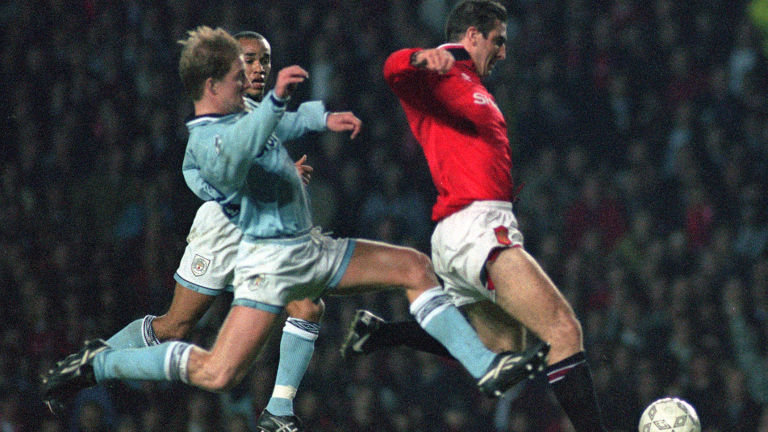 This Sunday brings one the most wildly anticipated derbies in the football world, bar El Classico (which isn’t a real same-city derby anyway). Liverpool v Everton and Arsenal v Tottenham do have a certain allure, but really none can compare to this historic match, first played in 1881.

As the day approaches, the mind games and questions begin. Will Silva be fit? Will Yaya wake up? Will Rooney play? And will Falcao prove what a shrewd signing he was? The 22 players who will fight for Mancunian honours will remain a mystery until an hour before kick-off; one of the few things we do know is that megalomaniac Michael Oliver will officiate, so Smalling and Rojo best watch their grappling in the area during corners!

This coming Sunday makes me reminisce about my favourite derbies witnessed over the decades, and I have three that are magnetized in my memory. Feel free to add yours in the comments.

The weather, I remember, was freezing, and the players were slipping and sliding throughout the game, except for one diminutive figure, Steve Coppell. A spritely and skillful right winger who could teach Valencia and Januzaj a thing or two about taking on your man, getting to the byline and putting in dangerous crosses, as well as scoring the odd important goal, or indeed two in this game.

Our delight was completed by an 18-year-old debutant called Andy Ritchie. I remember him stood on the touchline as a second half sub with the most outrageous Ziggy Stardust haircut I had ever seen, and me a Bowie fan since 1972. Andy made it 3-0 with his debut goal and the points were confirmed.

To me, this was one of the best teams we had that never won the league, thanks to Liverpool. The line up was Gary Bailey, Brian Greenhoff, Gordon McQueen, Martin Buchan, Arthur Albiston, Steve Coppell, Mickey Thomas, Sammy McIlroy, Lou Macari, Jimmy Greenhoff and sub Andy Ritchie

Niall Quinn had put Man City two up by half-time and I was resigned to that fact we might lose this one. Fergie’s hairdryer must have been on ‘level 3 – scorching’ at the interval. Eric Cantona pulled a goal back after 52 minutes, but as the clock ticked down, it looked as though it would be nothing more than a consolation until Cantona scored the equaliser 13 minutes from time. Summer signing Roy Keane, in his debut derby game, stormed into the box and crashed Denis Irwin’s perfect looping cross into the net to clinch a dramatic winner after 86 minutes. City were shattered and United were on their way to a double-winning season.

A 5-0 drubbing for the noisy neighbors at Old Trafford, with Cantona and Kanchelskis teaming up for a superlative display of speed, skill and arrogance. Cantona began the rout with outrageous dexterity, bringing down and controlling a long ball from Kanchelskis, out-muscling Brightwell, and slotting home against the hapless Tony Coton. Kanchelskis then ran riot scoring a hat trick, all set up by Cantona, and they wonder why we call him “King Eric”. Hughes scored the fourth, but the demolition was already complete. Is was, for me, not so much the result or the fact it was against City (OK maybe it was), but the display of Cantona, Ince and Kancheskis that night was astonishing, and poor City had no answers.

There are many more memorable games from the red side, and I am sure the blues have their stories, but let’s hope for a great game on Sunday full of brilliant performances and good clean action. Oh, and maybe a last minute winner by Falcao would help him gain his place in derby folklaw like Owen (2009), Scholes (2010) and that goal of the decade from Rooney (2011).