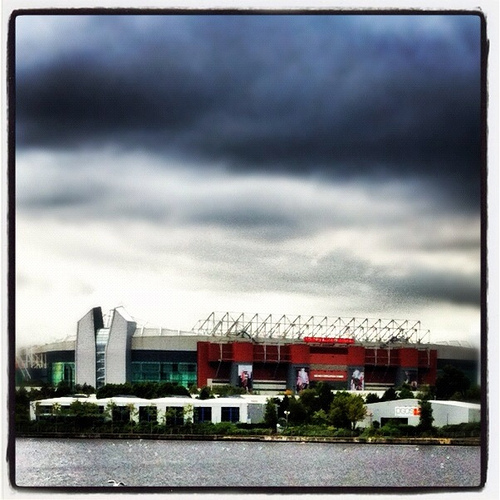 Last night’s abject defeat against Sunderland was epitomised for me by the sight of a young kid crying inconsolably as I plodded down Sir Matt Busby Way before crossing the tram tracks and heading home with a heavy heart.

After a truly poor game that climaxed with a light-speed journey from despair to ecstasy and back again, there was an overwhelming sense of gloom in the air; an all-pervasive bleakness that no amount of gallows humour could mask.

The phone in my pocket quivered with messages of misery from fellow Reds – “I’m devastated,” “Where are we headed?” “How do we come back from this?” I didn’t have any answers.

It’s barely worth retracing the increasing familiar details of our shocking yet eerily predictable Capital One Cup exit – suffice to say we didn’t deserve to win, and Januzaj was once again the only player that looked like he belonged in a United shirt.

Our penalties were laughable, and Lee Mason’s awful performance added to the frustration, but our problems run infinitely deeper than shit spot-kicks and the dubious decisions of match officials.

Adnan aside, United are clearly a team bereft of confidence, and with every new embarrassment we suffer, the rot spreads that bit more. With a manager undeniably short on charisma who lacks the winning record to inspire the unwavering belief of his players; with Rooney injured and no-one else capable of real leadership on the pitch; with too many players of questionable quality, we look perpetually on the verge of some new humiliation; plunging inexorably into the abyss.

Some of you will say this is a load of melodramatic crap, that things really aren’t that bad. I admit I’ve only ever been around when times were good, and that even a temporary blip is hard to comprehend. But amongst those with longer memories and a stronger sense of the virtues of patience and restraint, there is still a sense that things could get a lot worse before they improve.

Sure, football’s all about ups and downs. To truly appreciate the highs, you need to get acquainted with the lows; feel the full emotional range. I don’t mind the odd despondent day; the odd tearful knock-out – it makes you feel human – but we’re United, we’re used to feeling superhuman. Right now, though, we’re neither arrogant nor better. We’re wounded, we’re weak, and who knows what comes next?

But football’s a funny game, eh? Maybe Juan Mata can help bring us back from the brink. Maybe his arrival will signal the start of a brave new era. Maybe Moyes will get a grip and ultimately assemble the GREATEST MAN UTD SQUAD OF ALL TIME. Whatever happens, at least there’s one thing I know for sure: I’ll always love my club.