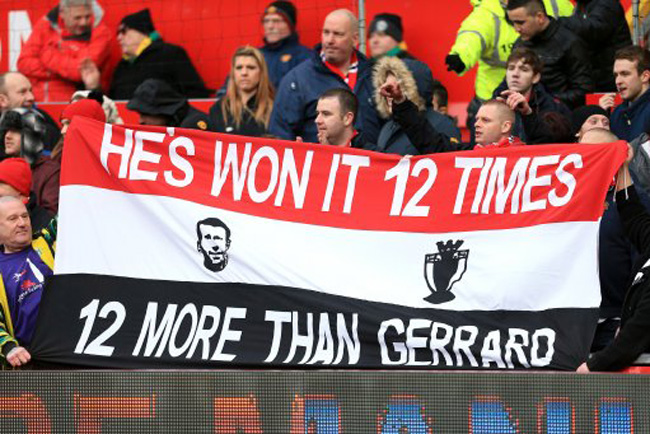 As we prepare ourselves for the annual battle at Old Trafford with our foes from down the East Lancs Road, this year has a very unfamiliar feel about it. When was the last time Liverpool came to Old Trafford in March with a chance of winning the title, whilst we have a better chance of going to Mars for our summer vacation?!

Many of you reading this will probably have never even witnessed Liverpool finishing the season in a higher position than us. It’s actually quite depressing to even think about it, and to add insult to injury, we also have to put up with our very noisy neighbours. Their fate-temptingly overhyped ‘quadruple’ may be out of the window, and tonight’s defeat at the Nou Camp was hardly unexpected, but they’re unlikely to get any less noisy in the near future.

So why are Liverpool playing so well? When Brendan Rodgers was appointed, I don’t think too many of us honestly feared a rebirth at the club; certainly no threat to our superiority. How wrong we were. Looking back at Rodgers’ career to date, I guess it shouldn’t be such a surprise to us that he has Liverpool playing with such attacking flair. It kills me to write it, but it’s true. He basically worked miracles at Swansea, had them playing in a similar way, and took his philosophy (perfected during his many visits to Spain) to his new club, Liverpool. At Anfield, he is blessed with far better players than he had at Swansea; they have bought into his methods, and are playing the best football I have seen from them in the past 2 decades.

In contrast we brought in a man who looks like he studied his tactics in Stranraer or Arbroath, rather than Barcelona or Madrid; a man who has never been known for his style of play or tactical sophistication. Our Premier League winners have most definitely not bought into what has become boring and predictable, with players playing out of position and nothing like a settled first 11 to speak of. In fact, Moyes has named a different starting line-up in every one of his 42 competitive games at United to date!

Just a note on training and management – whilst I think we all feel Moyes was a total clown for letting all the “winners” of our back room staff go, an old Red Devil; a United fan through and through and ex-assistant to Ferguson, has somehow managed to survive through 3 managers at the enemy across town! Yes, I’m talking about Brian Kidd! Moyes could have done a lot worse than bringing Kiddo back. He is unquestionably very good at his job, and whilst he does a terrific job at City, his heart is most definitely Red.

So finally, we await the game on Sunday. In truth, there is definitely a chance we could see United humiliated in front of our own supporters against the team I think we would all hate to see succeed. Personally I would prefer any team, even City, to win the title over the Scousers.

Moyes – if we do get humiliated, please do us all a big favour and never come near Manchester again. Of course, if we put Liverpool in their place, then beat the Greeks and give City a good going over, I will gladly eat my words. If Moyes can pull that off, then bring in the right players, and provide us with some exciting football to watch with pride; if he can at least give us a sense that trophies are once again on the horizon, I’ll start giving him a break!

One thought on “Man Utd vs Liverpool: Preparing for Battle”