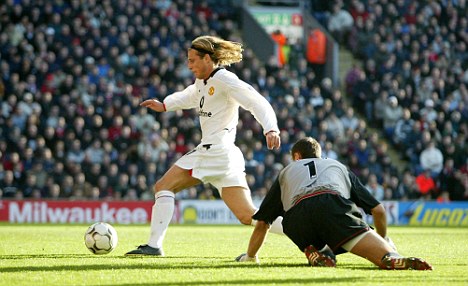 It’s that wonderful/horrible time again… United v Liverpool. When the players say that this is the one they’re really looking forward to, I always wonder, do they really mean it?

As a fan, for me it’s that strange mixture of excitement and dread that usually leads to me watching the match through my fingers like some awful horror movie: too frightened to watch, too enthralled to look away. Part of me just wants to go to sleep for two hours and wake up when it’s all over. But where’s the fun in that?

I don’t remember all the games we’ve played against Arsenal or Coventry or Blackburn or Chelsea over the years. But I do remember most of the Liverpool games, for better or for worse.

Often worse… I remember the 80s, when they were winning everything and we kept beating them. I remember the 90s, when we were winning everything but hit the odd brick wall against the Scousers – particularly horrible memories are Bruce’s own goal to seal a 2-0 at Anfield in 95 and, probably worst of all, Ian Rush’s grinning face as he wheeled away in delight having broken our hearts in 92.

And then there’s the 2000s, when all I can think of are all those Danny Murphy 1-0’s and having to watch the Liverpool fans in their coach home as they left Old Trafford with big smiles on their faces while we sat gloomy-faced in traffic.

But when it comes to Sunday, I’ll have to dig deep and remember the feelings when Cantona hit the back of the net at Wembley in 96, or when Solskjaer netted the winner in injury time at Old Trafford in the cup in 99, or, perhaps my favourite of all, Forlan at Anfield in 2002.

Oh, what a wonderful feeling…

This game may end up meaning a lot or a little to both clubs come the end of the season. But, for a couple of hours on Sunday, and a couple of days either side, for the fans it means everything. Let’s hope the players remember that and give us the performance that we deserve.