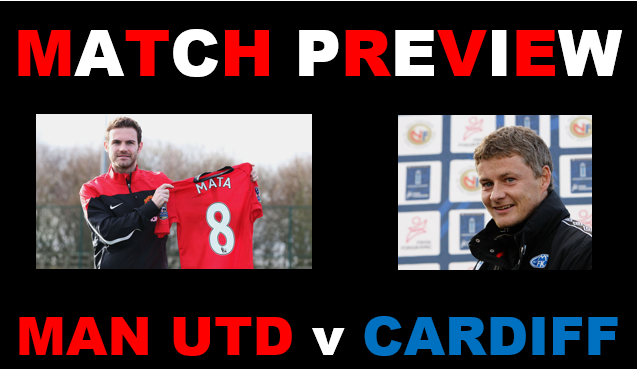 It’s been a while now since I’ve woken up on a match-day and actually been looking forward to the trip to Old Trafford. Our sub-standard performances have acquired an air of grim predictability. Even though we managed a few seconds of nostalgic last-minute drama against Sunderland last week, we ultimately caved and finished the night with our confidence dented yet again. There’s been none of the balls-to-the-wall attacking football we all know and love; instead, we’ve relied on Januzaj’s magical moments of invention and infectious sense of courage to provide us with precious flashes of hope and joy through a winter dogged by darkness.

But only the most jaded fan would look at tonight’s fixture with anything other than buoyant anticipation. We’ve broken our transfer record to sign Juan Mata, and it looks like Rooney’s here to stay. Moyes is finally showing he means business – he’s made it clear that Mata is only the beginning of his ambitious plans for the club, and he’s also issued a much-needed public bollocking to the under-performing members of the squad:

As long as Moyes is echoing this message in training, and in the dressing room, and as long as the key players trust his methods, our less convincing performers will hopefully start playing with a bit more impetus. Fergie’s success was built on his total authority – not power for power’s sake, but the ability to exert control. As he said in his autobiography:

“Power is useful if you want to use it, but control was my aim … The big decisions you make in those jobs are usually seen as exercises in power, when control is really what it’s about.”

Hopefully this is the week where Moyes takes control of the team and his destiny as manager of Manchester United.

Of course, there’s another big reason to be excited about tonight’s game: the return of a true United legend, Ole Gunnar Solskjær. Ole has made it clear he won’t be doing us any favours when he brings the not-so-Bluebirds to the Theatre of Dreams, and said he won’t hold back with the celebrations if things go his way:

“It is my job to win. That is why I am going there. I will celebrate if we score or win. I am working for Cardiff City. I will show emotion with my players and fans when we do well. I am a professional man and that is what I have to do.”

That’s refreshing to hear, and will do nothing to dampen the hero’s welcome he’s rightly due to receive. Expect some rousing renditions of ‘You Are My Solskjær’ and, who knows, maybe even a bit of classic Clive Tyldesley on the soundsystem before kick-off. Let’s just hope Ole doesn’t enjoy his homecoming too much.

Cardiff are enjoying a good run in the FA Cup – they’ve beaten Newcaslte and Bolton away to setup a Fifth Round tie with Wigan at the Cardiff City Stadium. But things aren’t going so well in the League – they’ve lost 5 of their last 6 games, and find themselves at the bottom of the table. If anyone can keep them up, you’d have to fancy Ole, and hopefully Zaha and Fabio can make a big contribution. But anything less than a convincing win for United tonight would be tough to stomach, and impossible to justify.

Ladbrokes are offering 11/1 on a 4-0 win for Man Utd, and that has to be the sort of result we’re aiming for. The way our season’s going, I’d settle for an ugly 1-0 win, but the occassion surely deserves something a little more memorable.

This is how I’d like to see Moyes set up the team tonight. This is an unashamedly attacking formation, which is exactly what a home game against a team 20th in the League demands. Evra and Rafael provide the width from the back, with Evans and Jones my preferred CB partnership in the absence of Vidic or Ferdinand. Carrick is pretty much the holding midfielder, distributing the ball from deep and intercepting Cardiff’s passes in the final third, with Fletcher playing more of a box-to-box role, pressing from the front, supporting the attack, and tracking back when needed. Up-front, Rooney leads the line, supported by a narrow but exceptionally capable and creative trio of Kagawa, Mata and Januzaj. I’d love to see what kind of football we could produce with this kind of shape and this mix of players on the pitch.

In reality, based on what we’ve seen so far this season, I expect Moyes to start the game with a more familiar formation, where the defensive line looks a bit flatter, and Jones is played out of position in midfield alongside Cleverley, who is probably due a game, particularly with Carrick’s injury against Sunderland last week. Note the lack of movement provided by the CM pairing compared with the previous setup. Rooney once again starts in the striker’s role, with Mata pretty much playing as a conventional number 10, Valencia running up and down the right-wing with occassionally effective results, and Januzaj on the left, where he can cross from the byline, cut in to support the attack or have a cheeky shot on goal.

Hopefully, whatever tactics Moyes goes with, any team with Rooney and/or RVP, Januzaj and Mata in the attack should be more than capable of outscoring relegation-battling Cardiff. If we don’t manage that, it’s surely the players, and not the manager, who have to take the blame.

How do you think we’ll line up tonight? Will this week be the turning point we keep praying for? Share your thoughts below!