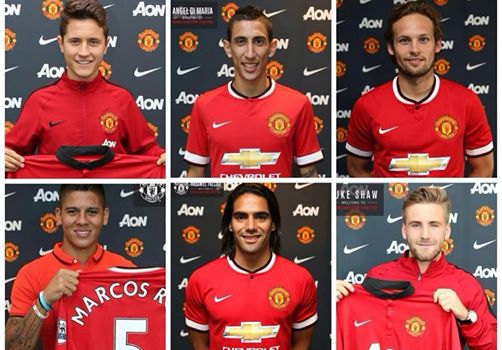 There was, it seems, no discernible plan or strategy to our summer spending. The mixed-up, hodge podge way that our transfers have been handled this summer have ranged from the sublime to the ridiculous, both hilarious and farcical, but in all ways, still better than last summer. United fans need to face facts. We’re not going to win the league this season, so let’s at least have some entertainment and some fun, and hopefully build towards brighter times after last season’s misery.

LVG needed to dismantle and rejuvenate a tired and ageing team. Many commentators have pointed out that De Gea may well be the only starter in our next game that started the final game of last season. Good. We were crap last season and frankly we weren’t great the season before. Everyone acknowledges that we were one of the poorest sides to win the league in 2012-2013, benefiting from an arrogant City side who were stumbling through Europe, and a Drogba-less Chelsea who were in between managers. We needed a revamp, and for all our complaining about the Glazers, money and players – much of it justified – a revamp is what we’re getting.

There are two ways of looking at the two most prominent situations:

Falcoa In, Welbeck & Hernandez Out: Stirring up the Strikeforce

ARGUMENT 1: We’ve lost two loyal and hardworking strikers and replaced them with one mercenary that we didn’t even need.

Even for those who doubted Welbeck’s ability to make it at the top with United, there’s something that hurts every time one of our homegrown players leaves, particularly a first-teamer, and even more so if they’re from Manchester. It’s so much stranger seeing him posing with an Arsenal shirt than it is to see Hernandez with a Real Madrid shirt. Why? Welbeck embodied something about the identity of our club that we all fear is being lost in the modern game. It’s a shame that he couldn’t make it with us. You can’t fault Welbeck and Hernandez for their effort over the last few seasons, even when they weren’t getting regular game time.

ARGUMENT 2: We’ve lost two OK strikers who rarely started a game and replaced them (temporarily) with one of the most prolific strikers in the world, even with his dodgy knee.

Welbeck’s return of 2 goals in 40 games a couple of seasons ago is pushing it even for proponents of the “but Fergie played him as a left-winger” theory. However much he improved, ask yourself this: if you had to bet your house on one of our strikers last season scoring a crucial one-on-one, who’s going to make you homeless? Van Persie? Rooney? Mata? Hernandez? I’d take them all before Welbeck, unfortunately, and whether he is from Manchester or not, that tells you all you need to know. Alongside Hernandez, whose knowledge of the offside rule was skin-deep at best (and seemed more akin with something from the Fast Show), there was no sense of the Cole-Yorke-Sheringham-Solskjaer quartet that Fergie always dreamt of replicating. It was clear who were the top 2, and who was always going to be behind them. They both were amazing servants for us and did some great things for which we’ll always be grateful, but these are desperate times.

Falcao is a different class and even if we get a few good months out of him, he is worth taking a chance on. His record is incredible. Ask any Arsenal fan who they would rather have bought on transfer deadline day, Welbeck or Falcao, and the answer is clear.

Defensive Disorder or Rebirth at the Back?

Replacing Ferdinand and Vidic was a priority that even the rosiest-tinted-spectacle-wearing red could see was a priority. LVG and the board must have seen it too. They must have. And yet, we haven’t signed a single natural replacement at centre-back. I assume we tried. Who was available? There wasn’t a huge list of names, aside from Hummels and a few Serie A players that I’m sure most journalists didn’t even know about. But it doesn’t change the fact that not one of Evans, Jones and Smalling – all very good and competent centre-backs but, as yet, nothing more – would get into any of the other top teams. If we were still playing only two centre-backs, it would have still been obvious. Unfortunately, LVG is implementing a new system with three centre-backs at just the wrong time at a club that doesn’t have a single one that is world-class.

ARGUMENT 2: We’ve signed some of the most exciting young defensive talent around.

This goes back to the Falcao Theory: if they’re good and they’re available, let’s sign them, then we can figure it out. This seems to be the kamikaze transfer policy that we’re operating under and, in terms of pure talent, Shaw, Rojo and especially Blind seem to fit the bill perfectly. A great centre-back still should be a priority come January and the summer, but for now, let’s give these guys a chance and hope that we can outscore the opposition.

So despite all these well-paid “professional” journalists pointing out all of the positives and negatives of our transfer window dealings, there’s only one deal that we’ve done that I really find puzzling. Step forward Tom Cleverley. What the hell is anyone thinking with that deal? Given that Cleverley is out of contract in the summer, it seemed to be a good chance to get him off our books and at least recoup something for a player that very possibly wouldn’t even make the squad let alone the first team.

The rumour was that we accepted an £8m bid from Villa but he preferred to go to Everton, who had a £5m bid rejected. Fine, let’s at least keep him for the season for when we hit our inevitable injury crisis. Maybe he could even slot in at right-back in an emergency?

A lot has been made about his lowly £30k-a-week salary (poverty’s not what it used to be…) and how low that is for an England international, but that just means it would have cost us very little to have a pretty decent squad player.

But now we’ve let him go out on loan, and a player who was costing us relatively little every week and is out of contract in the summer suddenly gets the chance to play out the season to impress any potential suitors and earn himself a big payday come July. Say what you will (and I have, many times) about Cleverley’s ability, but I really don’t see what we get out of that deal. Anybody? Anybody???