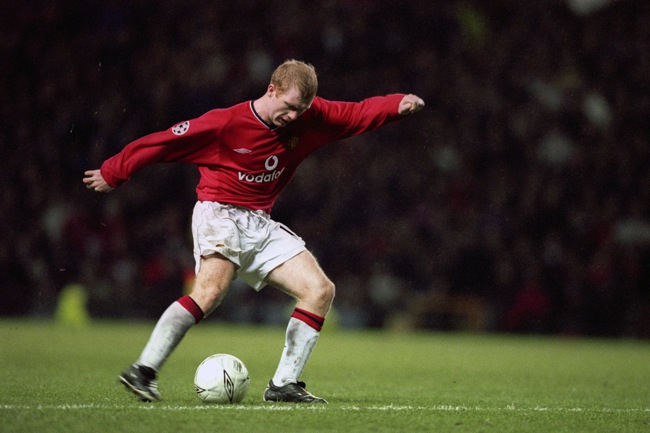 We counted 20 passes, and the move had already started when the clip began.

Everyone’s running off the ball, and Scholes is at the centre of it all, conducting like the maestro he was, before latching onto a deft backheel from Sheringham and scoring a Cantona-esque chipped goal that oozes class like this sentence oozes cliché.

What a brilliantly watchable bit of football. There have been signs of a better tempo under Van Gaal this season, with players quick to move the ball, but rarely have we controlled possession with this level of conviction. The reasons for that are many: the squad lacks the effortless understanding that seemed to exist across the park as the millennium approached – there’s no academy-drilled core, no telepathic strike partnership, nothing near a settled back four.

It does feel as though the defence is really key to everything. If Van Gaal can build a backline worthy of a self-respecting Man Utd team, we might have a chance of seeing more of that philosophy we’ve heard so much about. With stability, and indeed quality at the back, we might start seeing the team play more like a whole. And De Gea might even stick around.

Everyone loves a bit of tiki taka, but is it really the strategy for every situation, or is it something more tactically flexible we should be aiming for? As much as we’ve all heard Van Gaal’s ‘philosophy’ spoken about, quoted, repeated and mocked, if the players themselves don’t yet fully understand it, then the most fans and pundits can do is speculate.

Is Tiki Taka Dead, Or is it the Future for Man Utd?

Man Utd might have been playing tika taka since before it was cool; with Barca’s identity under existential threat, and the death of tiki taka a well established narrative, could a defensively-fortified United be the team to bring back total football, or has the game changed too much?