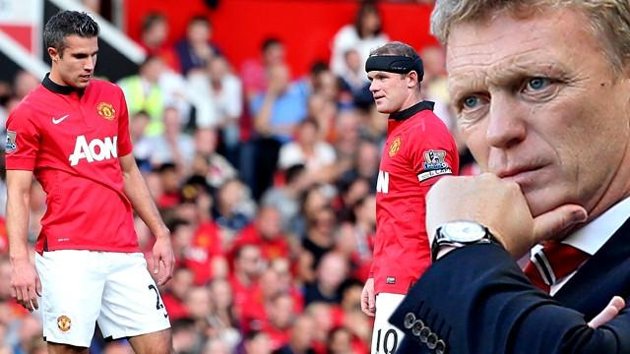 That’s the current top 4 of the Premier League.

Let’s look at the current squad and ask ourselves, realistically, if the whole squad was put up for sale, who would be signed by any of the current top 4 teams?

A simple answer is, right now, you can pretty much guarantee that only Wayne Rooney would be wanted by any of these clubs.

Of course, Januzaj looks a very promising player and De Gea is a top keeper, but we can say for sure that’s where it stops. None of rest of the squad would have a prayer of getting into the other clubs sitting in the top 4 places.

In the past, Ferguson was able to get average players to perform to standards beyond their ability, but Ferguson has gone and the man who has replaced him is left with mainly average players, unable to raise the standards enough to pressure the top 4. He didn’t help matters by signing another average player for £28 million, and the reality is that if Moyes does not make some world class signings in the next 2 windows, United will become a mid-table team.

I did not include RVP as a player that other top 4 teams would want to sign as, realistically now with his age (and rediscovering his old habit of being injured for half the season), I don’t believe that any top 4 club would want to sign him now.

Manchester United need to invest at least £200 million in the next 6 months if they seriously plan to challenge for the top 4 next season. That money needs to be spent wisely on the right players, and Moyes needs to show he can actually manage. Then United might have a real chance.

There’s no doubt that the current top 4 clubs will also spend to improve, and they are already much stronger than we are. It could be a long way back if Moyes and Woodward have not done the homework required.

One thought on “What If All Our Players Were For Sale?”