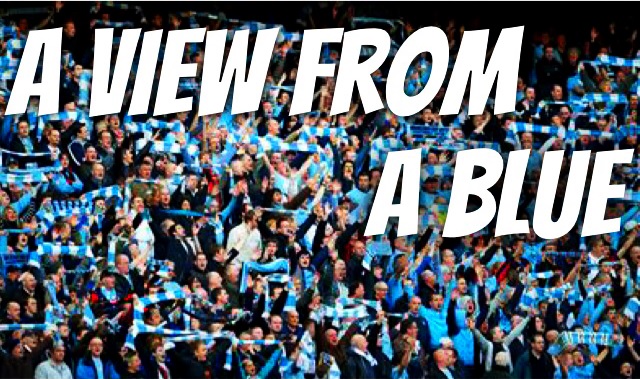 Ahead of today’s game against City, we’ve got a view from a Blue – a chance to see things from the enemy’s perspective. Dan Morehead writes for the Man City match-day programme, and Tweets @Danny11M. Here’s what he had to say…

Is the Manchester derby the biggest game of the season for City?

It’s the one we all look for as soon as the fixtures are released. In my lifetime it had mainly been played for bragging rights and attempting to derail United’s title challenge, while tomorrow the roles seem to have been reversed. The games at Anfield and the Emirates matter more in title terms.

What do you think will be the key battles in today’s game? Which United player will be the biggest threat?

If Yaya and Fernandinho can set the tempo in midfield it’ll be hard for United’s centre to compete. Rooney is always fired up for derbies and we’ll need Kompany to keep on him. The danger with Kompany pressing high up to meet him this time is that Van Persie’s injury will mean Mata isn’t shunted out wide, so he’ll actually be able to work in his best position and thread passes through to the runners. We’ve seen two red cards as a result of the highline in recent weeks, so it’s a risky tactic. Kompany’s domination of Rooney in the last derby shows why it can be so effective though.

James Milner has been great in the last couple of Old Trafford derbies, so it’ll be interesting to see whether Pellegrini opts for him or the pure pace of Navas. With Evra’s tendency to wander well out of position I’d be tempted to give Navas the nod.

You must be pleased that Kompany’s back for the derby, but how much will you miss Aguero?

He’s a huge loss, especially as Dzeko and Negredo aren’t in great form and Jovetic is still recovering from injury. Negredo and Aguero’s partnership was incredibly exciting to watch, so it’s frustrating that we’ve barely witnessed them on the same pitch in 2014 so far.

Do you think City will win the league this year? If not, who would you want to win it?

If we win our games in hand we’ll be 3 points clear at the top, but with trips to Anfield, the Emirates and Goodison to follow Old Trafford we’ll likely drop points somewhere. We can win it, but we’ve got by far the hardest run-in. I don’t really have a preference for which other team I’d want to win it; Suarez or Mourinho? Probably Arsenal then…

What do you have to say about your recent defeats to Wigan and Barcelona?

There’s no shame in going out of the Champions League to Barcelona, but it is frustrating that we handicapped ourselves with red cards in both legs. An hour with 10 men against a Pep team effectively killed the tie. The Wigan defeat was inexcusable though. Minds were obviously in Barcelona but we were too sloppy and Wigan deserved their win.

Do you think United will be back in top 4 next season?

I think you’ll be closer to it, but it would require some major squad refurbishment and/or a better manager.

How would you rate our chances against Bayern?

Who do you think will be United manager next season? What do you make of Moyes?

I think the Olympiacos win was probably enough to give Moyes another year. Honestly, Moyes looks out of his depth. We’re eight months into his reign and he still doesn’t appear to have a defined starting XI, or even a style of play beyond reactive crossing. That’s pretty damning. But like I said, the Van Persie injury could be a blessing in disguise as he’ll stop trying to shoehorn two strikers and Mata into the same formation.

Are you at all worried about financial fair play, and possible sanctions?

More annoyed than worried. It’s going to be nigh on impossible for any newcomers to break into the CL elite as the doors close on any pesky upstarts with ideas above their station. As for City, we’ve been preparing for FFP since it was announced and the deficit has continually reduced; I’d be very surprised if there was a sanction.

I honestly wouldn’t mind Kagawa. You aren’t using him, are you? With Lescott leaving we’ll most likely sign a long-term partner for Kompany.

Are there any exciting players in your academy we should be looking to poach?

Devante Cole should get a loan move into the football league next season, but it’ll probably be a good few years until Shaqueel Van Persie and Harvey Neville are old enough.

Why would a player choose City over United if the money on offer was the same?

To play with better players, in next season’s Champions League, under a manager who demands attractive, attacking football.

Any tips for the World Cup?

France could finally get their act together after a shambolic few tournaments. You’d imagine they’ll top relatively straightforward group of Switzerland, Ecuador and Honduras, meaning that they’ll play the runners up of Group F (Argentina, Bosnia, Iran, Nigeria). I still fancy Spain, but it’s worth considering France if you’re the type to bet and cash out – France to win and Benzema golden boot.

Who’s your least favourite TV commentator and why?

Michael Owen must be the only co-commentator who talks more than the lead, which wouldn’t necessarily be a bad thing if he had anything of value to add.

One thought on “Man Utd v Man City: A View From a Blue”