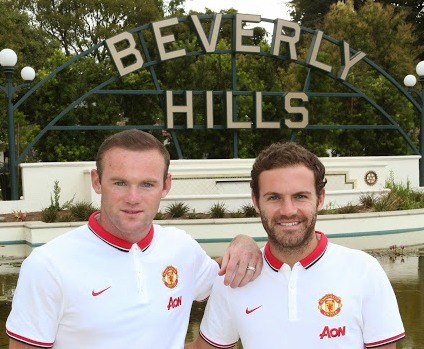 So United finally arrived in LA on Friday afternoon to a warm reception from the local supporters, before heading off for a stroll on Santa Monica Beach .

United seem to have brought the infamous Mancunian weather with them – in the 2 days since they arrived, we have seen more cloud than we have seen all year – perhaps the grey skies will have made them feel a bit more at home.

I was at the Beverly Wilshire hotel yesterday morning to pick up my match tickets, and spoke to a few of the United personnel who were pleased about the weather being quite overcast, whilst still warm, as the players can deal with this far more easily than the heat that comes with constant sunshine. But today, the blue skies and blazing sunshine are back, with 35C forecast for United’s friendly with LA Galaxy on Thursday. The positive is that California has almost no humidity, so whilst it’s very hot, it’s also very dry.

When I was at the hotel, one of the things on the agenda was for my 7-year-old son, who is a top junior golfer and has just finished playing in the Junior World Championships, to meet one of his all-time sporting heroes, Giggsy. We were due to meet him at 8.30am, but due to unforeseen circumstances, he couldn’t make it and the appearance is now rescheduled for Monday morning. Hopefully he will show, otherwise there will be one very disappointed 7-year-old, and his dad will be pretty miffed too.

I got some insight into the new regime under LVG, which certainly seems extremely strict, and the players will need to get used to routines they have never experienced before, not even under Sir Alex. They all have to be at breakfast at 9am – not 8.45am to 9.15am – but 9am on the dot. Yesterday, they were doing a double training session at the Galaxy facilities in Carson. They even had a local hotel booked so the players could all take a 2-hour rest between sessions – it’s all very regimented, which I think will greatly benefit our club, and if players don’t quickly accept the LVG regime, they will be gone in no time.
There was also some other news which I found very interesting – the hotel is a few miles from UCLA, which has great facilities and I would have expected United to be training there. However, Real Madrid use the UCLA facilities every summer and in fact pay for new pitches to be installed every year so no one else can use these facilities.

So to transfers… We are all anxious to see who Van Gaal ships out and who he brings in. We can speculate all day long, but only LVG knows who he really wants. I do hope we make a marquee signing – someone like Angel Di Maria; someone fit for that number 7 or maybe even the number 11 shirt.Keep an eye out for my next post, when I’ll hopefully be reporting on our meeting with Giggsy!