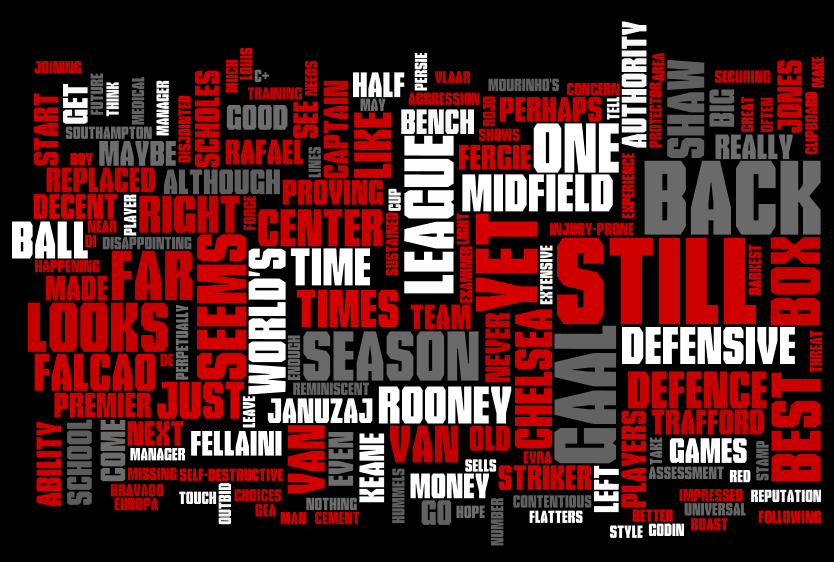 So we are a quarter way through the season, which means it’s time for Louis van Gaal and Manchester United’s half term report.

David De Gea has finally found the bravado and dominance of his area we were waiting for, and is proving that he can become of one the world’s best. He’s had to play in front of thirty different back lines so far, which is unreasonable in the extreme! Will he still be Old Trafford in the near future? If Real come calling, I doubt it.

As exciting as it was to see a world class striker like Falcao joining us, the state of the defence remains a major concern. By all accounts, Falcao wanted to go to Juventus, but they were outbid by big spending Woodward when United would have really benefitted from securing an experienced center back. There were a few we could have spent money on – the likes of Vlaar, Godin, perhaps even Hummels, or maybe Daniel Agger  and Vermaelen, both of whom boast extensive Premier League experience.

Our defence still looks shaky, and it seems Rojo is struggling somewhat with the cut and thrust of the Premier League. You also have to ask what is happening in the medical rooms at Carrington. Smalling, Jones, Evans, Valancia etc. – all defensive positions beset by injuries that seem to be sustained in training.

As per Mourinho’s assessment, Luke Shaw is on far too much money for a relatively inexperienced left back. Should we have let Evra go, or kept him on for another year, even perhaps as a coach, to help Shaw settle?

Rafael, although a decent right back, is still immature in his thinking at times, sells himself short with mistimed lunges, and seems perpetually at risk of being enveloped by that self-destructive red mist we’ve all seen descend. And why he was marking Drogba in the box on Sunday during corners baffles me, when Fellaini should have been right up in his grill. The fact that Van Gaal said it was miscommunication shows there is no defensive authority in the ranks.

We can never hope to challenge again until our defence is shored up tight with a strong spine of center halves and central midfield a la Cahill, Terry and Nemanja Matic at Chelsea. Van Gaal knew this but nothing was done. It may be too late by January, and we face the threat of missing out  on the Champions League yet again next season.

We can all agree that we never replaced either Keane or Scholes, just as we have not replaced Ferdinand or Vidic. Blind is proving to be a decent midfield protector, but doesn’t have the aggression or passing ability of a Scholes or Keane. Mata, meanwhile, is yet to prove he isn’t just an expensive panic buy; although his goal stats are good, he hasn’t got the tackling ability or defensive qualities a box to box midfielder should possess. I was quite impressed with Fellaini against Chelsea – a one off, or can he cement his place in our first 11?

Jones – once cited by Fergie as having the potential to be the world’s best – is exceptionally injury-prone for a big guy. He often looks erratic, and doesn’t contribute enough going forward when he’s in midfield. As a center half, he’s okay, but again does not have Ferdinand’s calmness on the ball or Vidic’s guile.

Thankfully, van Gaal seems to have scrapped his three-man defense, and the wingers are back. Di Maria, a shining light in our darkest times, has, despite a shocker against Chelsea, showed us why the Madrid players didn’t want him to leave.

Januzaj still flatters to deceive – he has pace and a few tricks, but his distribution is delayed, and his indecision on the ball is at times reminiscent of Nani. When Valencia is fit, we have the same issues, but he does work better with Rafael. Hopefully Januzaj and Shaw can forge a good bond on the left, but that could take time.

Van Persie is not the man he was under Fergie. Excuses abound, but World Cup hangover and injury worries notwithstanding, the truth is that, at 31, he’s slowing down and his touch is not as sharp as it was.

Falcao is yet to shine at Old Trafford – we like his looks, style and reputation, but he really needs a run of games as the number one striker, as his confidence will slip being a bit-part player on the bench.

As for Rooney? Well, Rooney is Rooney: workhorse, volatile and dedicated to the cause. I don’t think he should have been made captain though – contentious maybe, but I just feel he doesn’t have the universal respect of the team that a captain should have.

I wish van Gaal would get up from the bench once in a while and start to stamp his authority. He’s great in press conferences, but in the dugout he seems far too placid, clinging to his clipboard, and looking more like a school examiner than the manager of the world’s best.

In Summary: Signs of potential, but plenty of hard work ahead

All in all, a disappointing start to the season with far easier games than Moyes had, yet one point less at the same time. Our “Vilozophy” is still yet to come together, as the team looks disjointed with no real flow. We still give the ball away too easily, still make school boy errors at the back, and our crossing into the box is poor. When you see how well Southampton are doing following the exodus of some of their best players and the brilliant replacements Ronald Koeman has brought in, you wonder if we made the right choices. Time will tell, but for me, get ready for Europa League next season.