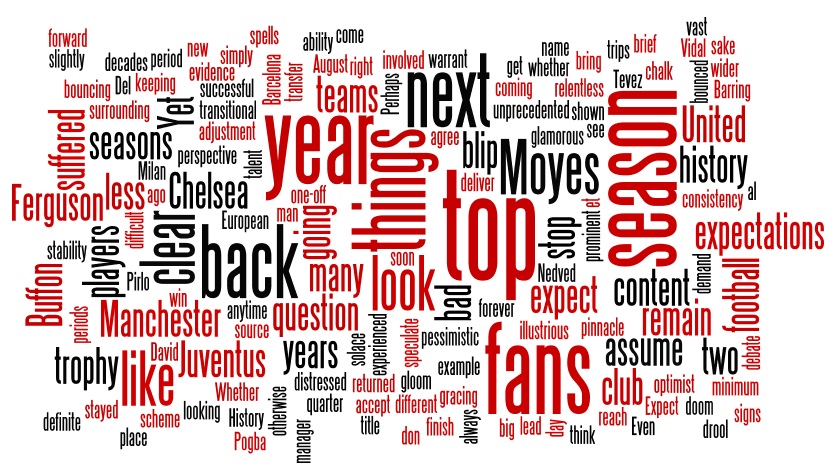 With the top 4 looking almost certainly out of reach, many United fans have already started to look forward to next season. Barring ‘doing a Chelsea’, it looks like we will not be gracing the pinnacle of European football next season, but does this warrant the doom and gloom currently surrounding the club?

Although it is difficult to speculate which players, and even which manager, we will have come August, for the sake of this debate, let’s assume that Moyes will remain in place. This begs the question, what are the minimum expectations we, as fans, have for the coming year? After the stability of the last quarter of a century under Ferguson, it was clear that this would be a transitional year, but can we accept this period of adjustment spilling over into next season?

Should we be content with a top 4 finish, should we demand to be involved in the title race, or should we expect to win the league next year?

I expect to see clear signs of improvement, a clear transfer strategy, and just unquestionable evidence that we are going in the right direction. Whether Moyes can deliver those things, I’m not so sure. But would our expectations be any different under new leadership? Would we simply chalk off this season as a blip and assume we will be challenging on all fronts, or would be have to be content with another year or two of transition?

I am forever the optimist, and like to look at things in perspective. By no means is it unprecedented for a top team to have an awful year or two – it’s testament to Ferguson how distressed our fans are this season, such was his relentless consistency and ability to bring trophy after trophy back to Manchester.

Over the years, and the decades, many top teams have suffered a blip in their otherwise illustrious history. In the wider scheme of things, one-off bad seasons like this mean very little. Barcelona, Milan and Chelsea, to name a few, have all suffered woeful seasons and brief baron spells, but they bounced back.

Perhaps the most prominent example of this, and a definite source of solace, is Juventus. Today we look at them and drool over their vast talent – Pogba, Tevez, Vidal, Buffon, Pirlo et al. Yet a couple of years ago, they found themselves in the slightly less glamorous Serie B. Did that stop Juventus from keeping their top players? No – Buffon, Del Piero and Nedved all stayed. Did that stop them from bouncing back? No. Even the most pessimistic of fans would agree that no matter how bad things get, I don’t think we will find ourselves going on away day trips to Hartlepool, Wycombe or Torquay anytime soon.

Manchester United the football club will be fine. History has shown that big teams have experienced less successful periods in their history, but have always returned to where their fans believe to be ‘where they belong’. Yet the question of whether David Moyes is the man to lead us back to the top will remain. And rightly so.

One thought on “What Can We Expect from Next Season?”