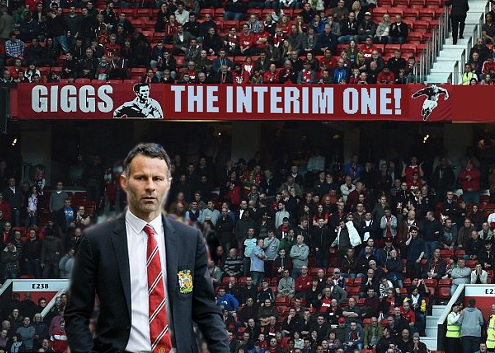 I watched Ryan Giggs’s first press conference as interim manager on Friday with some pride and relief. He was assured, funny, expressive and said what we have all been saying for the past ten months – at last, somebody at Old Trafford was listening to the fans; well, he is a fan himself.

The funniest moment had to be when he was asked by a journalist, “Will you be a player or a manager?” and Giggs replied, “Well I’ve just given myself a five year contract,” laughing at his own response, as if the joke itself was a relief of all the week’s mounting tensions. Well done Giggsy, you put a smile back on our faces.

Saturday came; the moment we had all been waiting for. As the teams took their place on the field, Giggs emerged from the tunnel, dressed in his best company suite. A roar rose from the seventy five thousand there to watch history, permeating the Mancunian spring air.

How he managed to keep that huge bubble of pride and excitement inside his chest is a sign in itself of his bravery, and the demeanor he will need as a future United manager. If that didn’t faze him, nothing would.

The second best moment for me was when he left his manager’s chair for the first time and set foot into the technical area to bellow some instructions to Ferdinand, and another roar went up from the faithful – this was a glimpse of the future, and hopefully not too distant.

In terms of the game, the only real surprise was that Cleverley started and Mata didn’t; the rest of the team pretty much picked itself for what Giggs was trying to achieve – a Fergie-style 4-4-2 with attacking full-backs and flying wingers, although I think I would have gone for Januzaj rather than Kagawa, who does tend to drift from his left position, and has yet to make the impact to match his supposed talent.

The first half was tense, and it seemed almost as though nothing had changed, with poor passing and slow build-ups going nowhere. There was plenty of possession, but little penetration, and Valencia’s crossing was still predictable and easily read by the defenders. Cleverley showed a little of what he was capable of, but his air-shot when his chance came did him no favours.

On forty minutes, Steven Whittaker fouled Welbeck as he was about to shoot on goal. Rooney’s penalty was smashed hard to the keeper’s left, he jumped in celebration, and the tension started to ease.

Whatever Giggs said in the dressing room at half time worked, as the second half saw some of the old magic return. As soon as Rooney let fly with a shot outside the area to m,ake it 2-0 three minutes after the break, the tempo exploded and we witnessed some of the finest one touch passing and movement of the season.

For me, the most satisfying moments came when Giggs made such early substitutions – Mata came on for Welbeck on 60 minutes, giving him enough time to make his mark. It was also nice to see Mata accepting Giggs’s decisions, and he even had a big smile on his face as he and Welbeck slapped hands in exchange.

It took Mata’s second touch on the field and a decent cross from Jones to score his fourth in four games. The shackles were off and the introduction of Young and Hernandez confirmed the difference between Giggs and Moyes, who preferred a defensive and safe option to close a game, Giggs was going for it, just like Fergie would have done.

Mata scored his second from a clipped cross along the goal line by Valencia, nicking in just in front of Henandez at the far post, who probably would have scored had Mata not beat him to it with a stooping header from close in. Even on 92 minutes, there was a great break from Mata on the halfway line to feed Hernandez, who, racing into the Norwich area and with only the keeper to beat, should have made it 5, but he pulled his shot wide of the post. Either way, it was great to see us attacking to the end. Far tougher tests lie ahead, but this wasn’t a bad start to life after Fergie: Chapter 2.