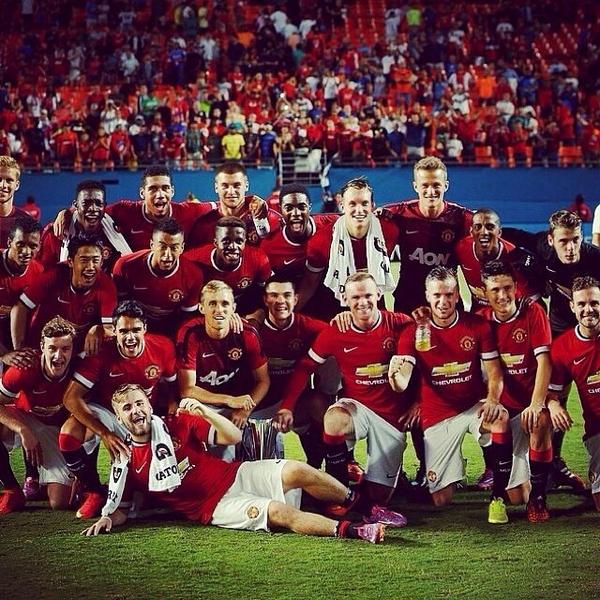 Watching the opening 45 minutes of his first matchup against Premier League opposition probably confirmed for LVG what he already knew: some of our players are not good enough, and will struggle against the very best in the league.

We did not have a single shot on goal in the first half. The defence looked shaky, with Jones conceding a penalty and Evans looking suspect, and at times Fletcher looked out of his depth, whilst Mata and Herrera also looked surprisingly ineffective. It’s an absolute must that we sign a tough midfield enforcer to work alongside Mata and Herrera.

Our first half performance also confirmed how much we need Hummels, or at least a similar quality defender, and a Di Maria who has the pace to open up opposing defences.

Fletcher and Evans – arguably our two worst players in the first half, were replaced by Cleverley and Blackett. A poor pass by Herrera should really have led to a second Liverpool goal, but for a poor finish by Lambert, and Sterling also went very close with De Gea beaten. United looked ragged in the first 5 minutes of the second half, and LVG will not have been happy with what he was watching.

But in the true traditions of the club, United didn’t let a poor first 56 minutes get to them. In the moment that turned the game in United’s favour, Herrera did well to hold off challenges and pushed it out wide to Chicharito, who sent in a great cross for Rooney to score from a tight angle. 2 minutes later, Mata blasted a shot into the back of the net from distance, and in a matter of 2 minutes, we found ourselves in front.

So onto the 88th minute – a beautiful move down the right, Young lifted his head and put in a great ball to the edge of the box, where 21-year-old Lingard hit a screamer into the bottom right corner. It was a beautiful goal to finish off our rivals and end the tour on a high.

I have to sign off by admitting that I have been one of Ashley Young’s biggest critics, but good for him – he’s really looking good right now and long may it continue!

I do think, based on what we have seen, it could be the last time we see Nani and Cleverley in the red of United, and I don’t believe they will be greatly missed. Fellaini and Anderson surely have to go too, and those 4 can at least raise the funds to buy Hummels or Vidal!Guinness Cup Champions – yeah!