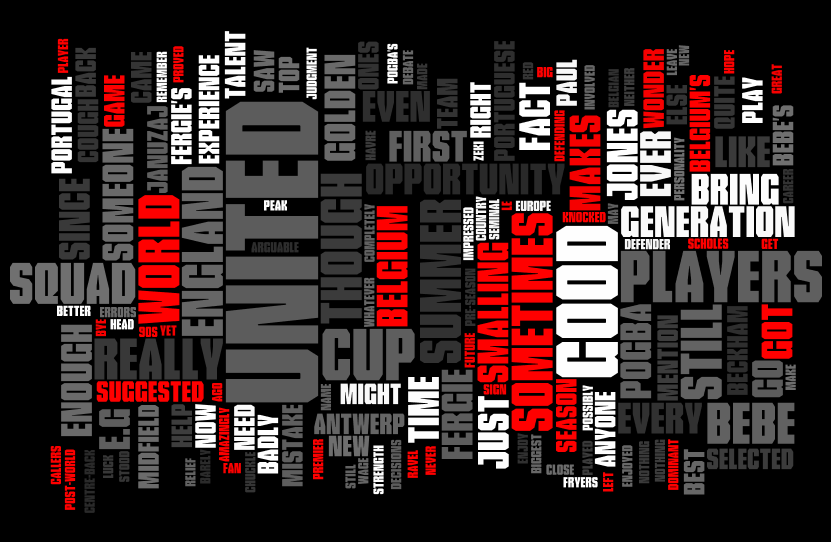 I enjoyed the World Cup. It helps that I’m not really an England fan. I just can’t bring myself to cheer for Lampard, Gerrard and Sturridge, or anyone else that doesn’t play for United. I’ve felt like this ever since Cole, Scholes and Beckham got booed by their own fans while playing for England in the late 90s just for being United players. Not to mention the Beckham debacle after his red card in 98. It’s actually a relief, as I was able to enjoy the World Cup, and the only real investment I had was in the United players – past, present, and possibly future. As we hurtle towards the new season, it’s a good opportunity to reflect on what might have been a seminal summer for some of our lads, but really wasn’t.

Jones and Smalling: Are they good enough?

I was back in England when they got knocked out to Uruguay. I couldn’t help but chuckle when, in the phone-ins after the game, half the callers were ringing to complain about the fact that Jones and Smalling were in the squad, and that showed the caliber of talent that England had to offer. Nothing about the fact that neither had played a single minute at that point, and both were being kept out of the team by Phil Jagielka who, although an above-average Premier League defender, is never going to be a World Cup winner. Still though, a little part of me couldn’t help but agree. Seeing our pre-season games has only reinforced the fact that, as solid as they are when we are in control of matches, it’s no wonder that LVG is still trying to sign a new centre-back. We need someone who is completely dominant at the back, urgently; someone who really loves defending and has the experience to cut out the silly errors. With Jones and Smalling, they always have a mistake in them every game, and I fear it will cost us.

Who else was impressed with the Belgium squad, even if they didn’t quite live up to their potential this summer? Strength in every position, players at top clubs around Europe, it’s no wonder they are referred to as a ‘Golden Generation’ for that country. Now, does anyone remember United’s hook-up with Royal Antwerp? At the time it was established all those years ago, it seemed a great opportunity for us to give our young players some experience, whilst also giving us the pick of the best Belgian youngsters of the time; the ones who would, by now, be at their peak. Yet which United players turned out for Belgium this summer? Fellaini and Januzaj, with Adnan not really getting close to the first choice eleven. Neither of these came through the Antwerp system and, even though it’s arguable that we picked up Januzaj through an increased presence in Belgium, it still feels as though we should have had better access to Belgium’s ‘Golden Generation’.

Fergie made some strange decisions in his career. We can all debate some of the stranger ones (*cough* Bebe *cough*). But this summer, one stood out for me above all. Sometimes you’re in two minds about whether or not a player will make it. Sometimes you know they will do well, but you just can’t bring them into the team quickly enough, so you reluctantly let them go (e.g. Gerard Pique). Sometimes you understand why they left, even though they achieve success away from United (e.g. Diego Forlan). Sometimes, despite their own big egos, you trust the manager’s judgment and hope he’s proved right when they finally go (e.g. Zeki Fryers, Ravel Morrison). But then there’s Paul Pogba… What was Fergie thinking?! Of course there’s an ego involved, but sometimes it’s justified by the incredible talent behind it. When I saw him play, Pogba absolutely dominated the midfield every time, tackling, passing, and scoring goals, fearless, ferocious and displaying the kind of all-round midfield brilliance that we’ve so badly lacked since Keane. Fergie must have seen this, having battled so hard to bring him from Le Havre in the first place. It only makes it worse that we need someone like him so badly right now. Whatever the personality clashes, whatever Pogba’s wage demands, letting him go so easily, not fighting with everything we had to keep him, makes it feel like Fergie’s worst decision since dropping Bruce in Barcelona in 94.

I can’t leave without mentioning Bebe. Farewell and good luck at Benfica. I still don’t quite understood what he was ever doing at United. Amazingly, I saw an article that suggested that United might regret selling him. He was the top Portuguese goalscorer in the Portuguese league after all! Read that sentence again and remind me why that makes him good enough for United. The same journalist then suggested that Bebe’s form last season was so good he nearly got selected for the Portugal squad at the World Cup. He failed to mention that Portugal basically had no centre-forwards of any note other than 32-year-old Helder Postiga, who barely ever scores anyway, and Bebe still didn’t get selected. I wish him nothing but the best, and he may yet come good and prove us wrong, but when it came to having a squad clearout, Bebe’s name was the first on the list.