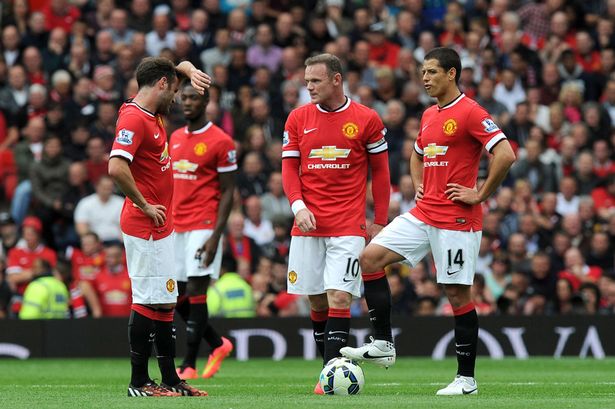 With the eyes of the world on Old Trafford this lunchtime, with millions watching as the new Premier League season kicked off, United lined up with what looked more like a League Cup team against the Swans. It was the same opposition that marked Moyes’ first Premier League game as United manager, but where he guided us to a 4-1 win, Van Gaal’s injury-hit squad sank to a 2-1 defeat, this time on home soil too.

The atmosphere in the stadium was muted throughout, with the more memorable contributions coming from the away fans, who, at 0-1, sang “Swansea, top of the league…” and later aimed some of those well-worn “sacked in the morning” jibes at Van Gaal, before a cheeky rendition of “come on David Moyes…”.

And seeing the vanishing spray make its Premier League debut was one of the few highlights for United fans whose new season excitement has quickly been undermined.

As I walked down Sir Matt Busby Way on my way into the game, last season felt like a bad dream, but by the final whistle, it felt a little like the nightmare had never ended. There was none of the one-touch brilliance we saw against the likes of Inter and Real Madrid in pre-season, and the weaknesses in the squad were laid painfully bare as we reflected on a rubbish start to the new campaign.

I’m not sure we necessarily learned anything new today, but some of the things we already knew were definitely confirmed. Here are 5 of those problems that just won’t go away…

1. Hernandez is a great poacher, but not much else

Hernandez was by no means the only player to come out of today’s game with minimal credit, but it’s fair to say he’s not someone who’s known for his great link-up play. The Rooney-Hernandez partnership is, of course, down to Welbeck’s injury and RVP’s fitness issues, but the sooner we can get Danny or Robin back on the pitch, the better. I really hope the rumours of us selling Welbz don’t turn out to be true – there’s a pretty long list of players we should be looking to offload ahead of our number 19.

2. Smalling and Jones are no Vidic and Ferdinand

Jones made some great tackles today, but at times the positioning of him and Smalling was all over the place, and the communication was non-existent at times. There was also a fairly comical moment when Smalling saw his number on the 4th official’s board, and started making his way off the pitch, only to realise he was looking at Swansea’s substitution. That pretty much summed up the cluelessness that continues to crop up in our inexperienced backline, with players who arguably might never reach the level we need from our first choice centre-backs.

3. We have ridiculous luck with injuries

Lingaard limped off today, adding to an already significant injury crisis, and highlighting the urgent need for reinforcements. We seem to have had terrible luck with injuries for several seasons now, but if we had a stronger squad, it might not be so catastrophic. In his pre-game press conference, Van Gaal listed 6 potential causes of Luke Shaw’s injury, and said it was impossible to pin down one factor. The World Cup hangover and the extensive travelling that many of the players did during pre-season definitely won’t be helping matters though. The staff need to do whatever they can to minimise the risk of further injuries, and Woodward needs to get his act together to close some deals before the transfer window slams shut.

4. Kagawa looks unlikely to have a future at United

Kagawa was an un-used sub today, with Van Gaal choosing to bring on Fellaini for Herrera as his last substitution. We lacked good play and incisive balls through the middle – Kagawa might have helped give us more options and penetration going forward, but the manager chose to leave Shinji on the bench. I’ve always wanted to see him succeed at United, but the chances of him having a long-term future at United seem to diminish by the day.

5. Fellaini is not a super-sub

Fair play, Fellaini scored a last-gasp winner for us against Valencia on Tuesday, but that had more to do with crap defending than anything else. With Fellaini on the pitch today as we chased the game, we simply reverted to firing crosses at the big man in the box, and for the most part, Swansea looked comfortable defending against that. His very presence in the final third alters the whole dynamic of the team, and Van Gaal surely has to have a better plan B up his sleeve.

I guess if there’s anything positive we can take out of today, it would be that the obvious need for further signings in pretty much all areas of the squad is now even more compelling. LVG will know exactly what he needs and who he wants, but with Woodward handling the negotiations, and with other clubs aware of our increasing desperation, we should expect any deals we do close to come at a heavily inflated price. Whether the Glazers will sanction such profligacy is perhaps the bigger question.