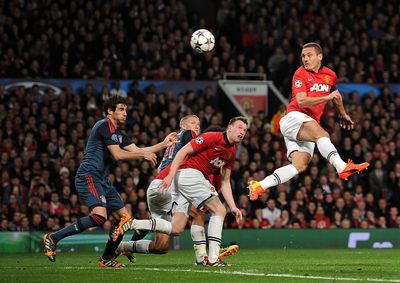 It was forecast to be an embarrassing night for United, not just by the pundits and naysayers, but even the most stoic of supporters felt that Bayern would come to Old Trafford and expose the frailties of this wounded animal.

The first half was dominated by Bayern as, predictably, Robben and Ribery teased and tormented, but the defence stood firm and, thankfully, Bayern’s possession did not translate into goals, even with over 400 passes to United’s 80! De Gea must have been pleasantly surprised having to make only one save from Robben’s twenty-yard strike, which he elegantly tipped past the post.

Welbeck, as industrious as ever, was denied an early goal for a dangerous high boot against Martinez, which I thought was more head to boot, before spinning to shoot past Neuer. An English ref might have allowed the effort, but it was not to be.

Late into the half and against the run of play, Welbeck had another chance to etch his name into the history books after outpacing Boateng from Rooney’s fabulous through ball, but again, his poor decision-making let him and the team down. When it was easier to round the keeper or shoot low and hard to his left or right, Welbeck tried to chip one of the world’s best goalies, and Neuer gratefully clawed the tame effort away from his goal and any danger, much to Rooney’s chagrin.

In the second half, apparently nursing an injury, 1999 survivor Giggs was substituted for Kagawa, who, as usual, seemed to fade into obscurity as the game went on.

Fallaini did not do much to enhance his status in the midfield; however, Carrick did his job in his usual unflustered and steady way. Buttner did well without too many erratic lunges or forages down the wing, and Valencia was diligent in his role on the right.

Then, in the 58th minute, all hope was raised when Vidic rose high to meet Rooney’s corner with an acrobatic curling header to the inside of Neuer’s unguarded right hand post. The keeper could only watch as the ball nestled into the corner of the net.

Hope against hope, United were ahead. Guardiola then made his tactical change and brought on 23-goal Mandzukic, who didn’t take long to make his mark. Rafinha collected a ball down the left and crossed into the United area with the sliding Buttner arriving too late to stop him. Mandzukic rose to head down towards Schweinsteiger, who blasted his 8-yard shot into the United net, perhaps showing Welbeck how to finish your opportunity when it arrives.

The game then ebbed and flowed without any real danger, and a draw seemed the most likely outcome. Bayern seemed to be in second gear and capable of upping their game at any moment, but were probably saving their energy for the return fixture where the real test will be. Schweinsteiger will be missing next week for a second yellow, which, to be honest, I thought a little harsh as he did remove the ball from Rooney as he strode out of the area with a strong tackle, and Rooney gratefully dived over his outstretched legs.

Late in the game, Guardiola brought on Gotze – a demonstration of the firepower at his disposal – while Moyes brought on Young for Valencia and Hernandez for Welbeck – need I say more?

Does this result show a tactical acumen we have not really seen from Moyes all season? I’m not so sure, as the players seemed to have found their energy, guile and strength in spite of and not because of their manager. Either way, United saved face and were not humiliated as most people expected. Will this save Moyes in the long run? Who knows, maybe it’s too late the hero!