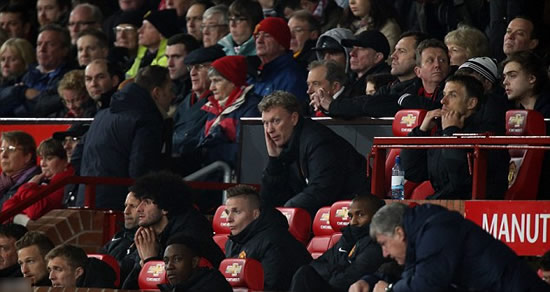 How much more of this do we have to suffer? It’s undoubtedly way way worse than post-Busby – Busby didn’t leave us champions by 11 points!

I attempted to give Moyes some backing after the West Ham victory, but I cannot stand to even look at him any more. He is so so out of his depth at United, it’s just ridiculous, and Bobby Charlton backing Moyes as the right man just helps make our club the laughing stock of world football.

Name ONE top club anywhere in the world that would hire Moyes as the manager. You can’t, as there isn’t one that would want Moyes. So why United?! Everton without Moyes are now 10 times better, and United with Moyes are 10 times worse than they have been in 3 DECADES.

Can you also say that these same players would have performed so badly under Klopp, Mourinho, Guardiola, Ancelotti or Simeone? Absolutely no chance – whilst the players are not necessarily the best, they are definitely better than how they perform under Moyes.

Against City, United had no fight, no movement, no NOTHING.

Quite honestly, I feel sick. I can’t write any more. Make no mistake, if Moyes was the manager of any of the top clubs in Europe right now and he had performed there like he has with United, we all know what would have happened come May. 100% he would be fired – I just hope United have the balls to get rid and bring in Klopp before Arsenal get him to replace Wenger.

Glazers, don’t be idiots and give this idiot your money to throw away. Just look at Fellaini for £27 million, who is a disgrace to the shirt and absolutely should have been sent off. We don’t play football that way at Man United.

Moyes OUT and take Fellaini with you.