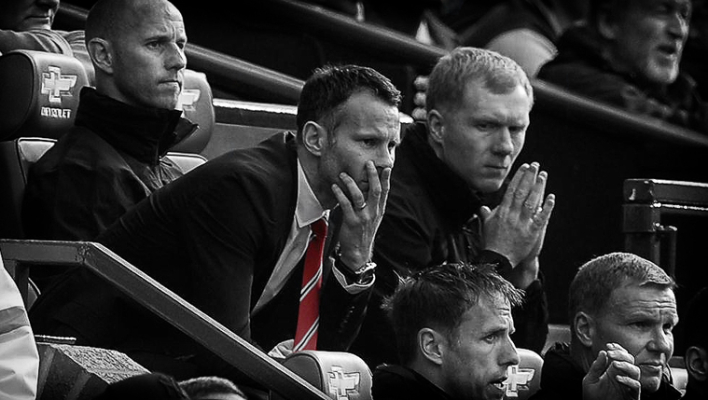 After last week’s euphoria, with the welcoming of Ryan Giggs and his pals, today saw a return to the lacklustre football that’s dominated our season, and the campaign to install Giggs as the permanent manager suffered a major blow. Other than one or two moments, the high-tempo, counter-attacking football he demanded from his players was nowhere to be seen.

Giggs started with the same back four as last week – providing some of the defensive consistency we’ve lacked – but the selection of Fletcher and Carrick in midfield was questionable, and a very poor performance by Carrick certainly didn’t help United this afternoon.

For the Sunderland goal on the half hour, Fletcher inexplicably turned off at the wrong moment by the corner flag, allowing Wickham to cross to Larsson, who lost Carrick in the area to slam home past De Gea.

Young and Nani tried to bob and weave their way through Sunderland’s defences, but their final balls were ineffective, with Hernandez playing too deep, and no target man up front. Mata also seemed ineffectual, and it was clear how much we missed Rooney.

Jones showed grit and determination, but again, his final ball let him down too often. If we could have taken advantage of the room on the right and crossed the ball better, we could have wrapped up the game by half time.

I don’t want to take anything away from Sunderland – they were stubborn, quick on the break, and defiant in defence. They carried out their managers instructions to the letter, which has brought them from the brink of relegation to virtual safety. Following their win against Chelsea at Stamford Bridge, and a draw that flattered City at the Etihad, we should not have been too surprised by their tenacity.

Giggs’s early substitutions were once again well-judged, and Januzaj for Nani injected some much-needed impetus and pace to the attack, along with some nice tracking back and tackling. Van Persie and Welbeck entered the fray on 66 minutes, but still Sunderland held firm.

As the last ten minutes loomed, chances were spurned thanks to poor finishing, and throughout the game there were too many horizontal passes across the outskirts of Sunderland’s area – echoes from the Moyes days that highlighted how much work there is still to do. It’s also worth noting that Sunderland hit the post twice, and it could have far more embarrassing for United.

This is the first time United have lost 8 games at home since being relegated in 1974 under ‘The Doc’, and the final whistle brought boos from some sections of the few United fans left in the ground.

As much as we wanted the old guard to get the keys to Old Trafford, I think today proved that not only does the team need a Van Gaal to strip down (no pun intended) and rebuild, to conjure a phoenix from the ashes. In fact, perhaps the board should look at Gus Poyet – if he can get a team of lost souls to play the way they have been in the past few games, imagine what he could do for us!