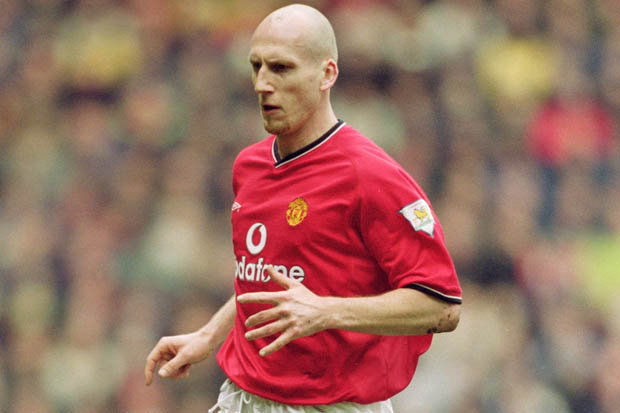 During his playing days, the Dutchman made a name for himself as one of the best central defenders in the world.

Stam was revered for his rare skill combination of speed, strength, and superb ball playing ability. These skills made him switch quite easily between right back and central defence.

In 1998, Sir Alex Ferguson and Manchester United made Jaap Stam the most expensive defender in the history of the game as well as the most expensive Dutch player. With a fee in the region of £10.6m, PSV agreed his sale to the English outfit.

Having moved to the Old Trafford in 1998, Stam didn’t take long to cement his presence as one of the favourites at Old Trafford. He was an instant leader within the team.

The Dutchman spent just three years at Old Trafford, but he practically won everything there ever was. In three seasons, Stam won three Premier League titles, the Intercontinental Cup, one FA Cup, and one UEFA Champions League trophy.

The former defender was once dubbed the “beast” by former Real Madrid player and manager Zinedine Zidane. He was such a fantastic player that even the best players from opposition teams respected him.

In a group that already possessed players such as Ryan Giggs, David Beckham, Paul Scholes, and Roy Keane, Stam remained a leading figure. He once said about his role within the United ranks, “Every club has like three or four players who are… like the spokesmen, and I was in there as well.”

Many fans still can’t find justifiable reasons why United sold the sturdy defender as at the time they did. Before he retired in 2007, Alex Ferguson admitted selling Stam was an error on his own part. The legendary manager said selling the versatile defender was a “mistake” in “playing terms”.

After leaving United, Jaap Stam went on to play for Lazio. He left the Italian team for AC Milan where he featured in the UEFA Champions League final in 2005 which Liverpool won.

Following a two year contract signed with Ajax in January 2006, Stam announced he was ending his career “with immediate effect” October 2007.

Jaap Stam’s only goal for Manchester United came against Leicester City in a match that ended 6-2 in favour of the Red Devils. Nonetheless, the Old Trafford fans still sing his name loud in recognition of the commitment and the incredible performances he displayed whilst at United. This is only fitting for a player who treasured the club and gave everything.