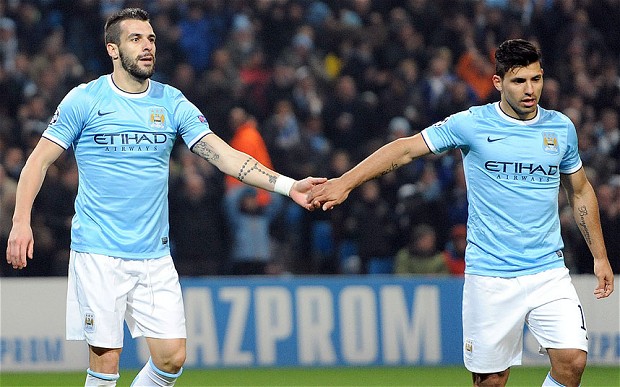 One has to stand back and admire the type of football coming out of the Etihad these days, as much as it hurts to see our crosstown rivals beat teams into submission in the way they have been doing.

Pellegrini added to an already impressive squad with the likes of Negredo, Jovetic and Fernandhino in the summer.

A monstrous goal-getting machine, they’ve put 11 goals past Spurs after last night, and even had the luxury of resting Negredo (23 goals in all competitions).

As much as it sticks in the throat, City look to be the team to beat for a few more years to come as they can only get stronger. As one pundit claimed, any team that finishes above City will win the championship.

So will City do the quadruple? I think it may be a bridge too far, but a domestic treble is certainly a possibility. They have strength in depth, with maybe some question marks at the back, but as free scoring as they are, as we used to be, the feeling is if you score against them, they will double it.

They are currently top of the Premier League with a point to spare and goal difference not worth mentioning, and through to the final of the League Cup against Sunderland, who, although they managed to win on penalties against a woeful United, will find it a little different against City.

City’s next opponents in the FA cup are Chelsea at the Etihad – a possible parked-bus-shaped stumbling block. Then comes the challenge of the Champions League against Barcelona, who are not the Barca of two or three years ago.

So how good are City when compared with the United team of the 1998/99 season from August to the end of January on our way to the historic treble?

Top goal scorers in all competitions

Goals in All Competitions

I heard that Pellegrini takes the team out on the field the day before a match and makes them work for hours shooting at the goal from all angles. This makes them aware of where the goal posts are from many angles, and it seems to have worked, with 115 goals in all competitions so far.

As for United, unless Glazers sell the club to oil or gas, it looks like we will be fighting for fourth in the coming years – not a great prospect, but with teams that have the wealth to buy the best, we are up against it as a club that is burdened by debt.