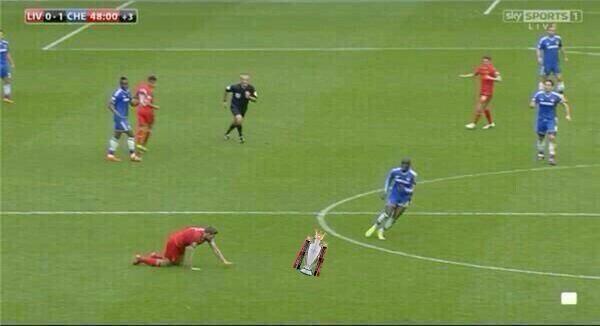 Let me paint some context for those not quite sure why I’ve only just discovered this. I’ve always taken some schadenfreude from when Liverpool, Chelsea, City and even Arsenal lose a match or, more poignantly, a trophy. But I’ve never been that bothered if they win – it doesn’t eat away at my soul. English clubs winning the Champions League is good for football in England, whoever the team, and though it’s annoying when they win, life goes on. However, when it comes to the domestic league, that has started to bother me on a deeper level.

For the most part, during my lifetime, United have been challenging for the title every year, and this is where my emotions have been directed. Whereas this year, we knew by January that we would not be winning it this year. This was unprecedented. We’ve been so spoiled with success, I’ve never had the space to direct my utter contempt toward a rival during the race to a title. Taking a back seat in the race for the Premier League this year has gifted me with a new set of eyes; eyes full of hate, fury and jealousy.

Gary Neville put it better than I’ve heard any other United fan: “It’s like deciding who you would rather sleep with your wife…” For me, as I’m sure it is for most Reds, it’s definitely not Liverpool.

I cannot bare to see Liverpool win a title. Not only will we never hear the end of it, but we will have the team closest to our league record peering over our shoulder, looking to equal our haul. I may have some empathy for Liverpool fans who had to watch us overtake their record whilst their team lingered in obscurity, and how gut-wrenching that must have felt, but that’s definitely not the dominant emotion.

My desire for Liverpool not to win the title runs so deep, I’ve found myself almost supporting teams I usually despise. Chelsea and City are just awful – one became a title rival thanks to an oligarch for a sugar daddy, and the other was an established enemy that was never really a threat, before suddenly transforming into a monster; a next-door neighbour who could win the title with the most money that football had ever seen.

If Liverpool weren’t involved, it’d obviously be City that I wanted to fail. Or would I? I’m a Manc after all, wouldn’t it be good to see a Mancunian team win? No. It wouldn’t.

So whilst l’ve been offering a level of support to the London/Russian consortium and the other half of Manchester/Abu-Dhabi, it’s more out of necessity than want. I feel petty, oh so petty. But Liverpool losing to Chelsea was a chance to celebrate.

Seeing Liverpool lose such an integral game gave me great joy, knowing that it was no longer a “forgone conclusion” that they would win the league. Then seeing City win, keeping the title race alive having just seen Liverpool relinquish their first concrete chance to win the league in over 20 years – it had a certain appeal.

I have Liverpool-supporting friends, and as a sign of respect, I chose not to provoke them. I know how unwanted a message, call or plane flying past their house skywriting their failure would be. So I refrained, and revelled in it with fellow United fans instead.

In all fairness though, Liverpool have done it the right way. They’ve played some fantastic football on a budget that does not come close to the other two challengers. For its romanticism, this is the way it should be done; a financial underdog who beat the others doing it the ‘proper’ way, like United did (cue arguments about how much money we’ve spent in the past, to which I retort: Not as much as City or Chelsea).

But it’s Liverpool. It’s been bred into me to have this innate and irrational dislike for the Merseysiders. A feeling I’m sure is reciprocated. We’re actually very alike – fantastic histories; tragedy, success, identity and a passionate core fan base, as well as a network of supporters spanning the globe. So whilst I respect them, I hate them too, for no rational reason; just the primeval tribalism that controls a large chunk of my brain as a United fan.I just cannot bear to watch Steven Gerrard lift the premier league trophy. I don’t care who wins it, just as long as it’s not Liverpool.