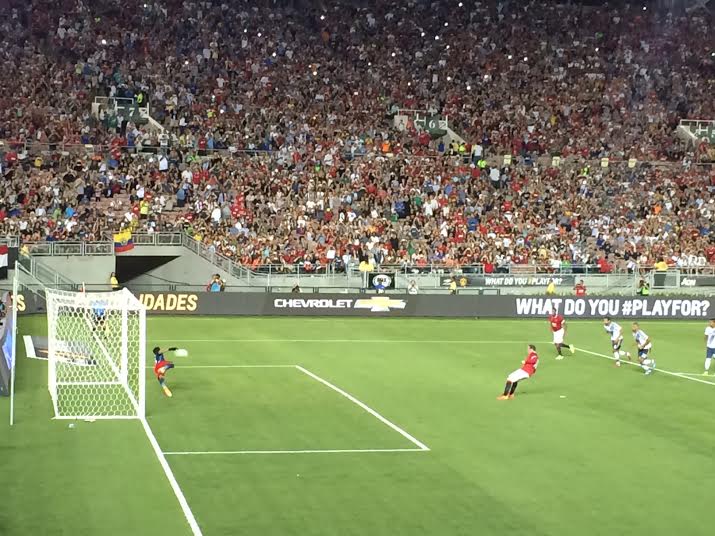 Just under 87,000 supporters turned up at the Rose Bowl on Wednesday night, 90% of them wearing the red of United. The game didn’t disappoint, as we were treated to 7 star performance by a new-look and very impressive United.

Herrera looked like he had been at United far longer than a few weeks, and was very impressive in all areas of his game. Reece James gave reason to believe we don’t need to waste money on a back up to Luke Shaw, and Phil Jones gave a good display, but the right side of defence, wth both Smalling and Rafael looking unimpressive, must surely be a priority for LVG .

The movement in midfield, especially between Mata and Herrera, was great to watch, and with the movement of Welbeck and Rooney up front, United always looked very dangerous in those first 45 minutes.

I am sure I am not alone in hoping United still make some more major signings, and if we could add De Vrij, Blind, Di Maria and Vidal, we would be serious title contenders in LVG’s first season. We can obviously sell players who won’t be good enough, such as Nani, Young, Anderson and Fellaini, which will help balance the books.

The atmosphere on Wednesday was brilliant – it was amazing to see such a sea of red 6,000 miles from Manchester, quite incredible and just shows the enormous power of our great club. There was a festival atmosphere, with fans arriving up to 8 hours before the game, having BBQs, and using all the fantastic facilities that had been set up like a fan zone similar to those set up for the World Cup.

A great night was had by all… 7 goals, what more can one ask for, even if it was against LA Galaxy?! How life can change in 12 months – I am sure the Moyes nightmare will be well and truly behind us, and whilst we have to put this into perspective, we looked confident and GOOD.