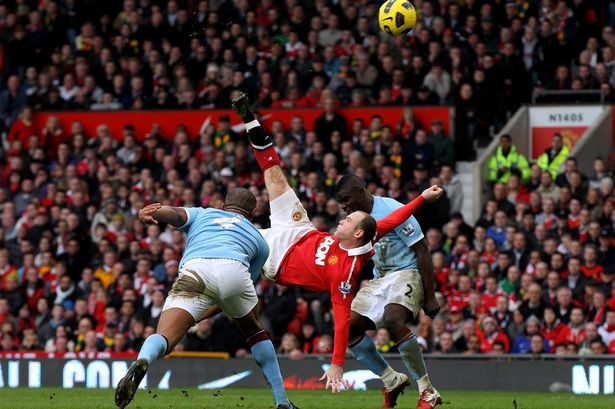 What’s wrong with Rooney? When he burst onto the scene as an £80-a-week apprentice in 2002 with that dynamic goal against Arsenal, a wonderkid was born.

Two years later at the age of 18, he was snapped up by Fergie for £26 million; a huge amount for that time, but ten years later, it seems to have paid off. He is close to breaking the all time goal scoring record for a Manchester United player, just 32 goals behind Bobby Charlton’s 249, yet in almost half the time.

Season after season, Rooney was knocking in the goals (some absolutely awe inspiring), fizzing around the pitch and acting as the engine of the team. Defensively, he was an important player too; a pair of lungs that could fill a zeppelin.

In the 2009–10 season, Rooney was awarded the PFA Players’ Player of the Year award, and he has won the Premier League Player of the Month award five times – a record he shares with Steven Gerrard. However, it seems the rot began to set in when, in the beginning of the 2010/2011 season, Ferguson announced that Rooney wanted to quit the club as he felt their ambitions did not match his own.

Many fans were up in arms; it was seen as an act of treason, and he was even subjected to harassment from a small sector of fans outside his house when rumors spread that he might be joining the noisy neighbors.

Some fans agreed with his observations, which seemed a portent of what has been happening at Old Trafford. As Chelsea and City began their plans to build, United and Fergie hardly moved in the transfer market.

Soon after, Rooney, with a new five year contract, was photographed looking quite uncomfortable next to a beaming Fergie, who wore the knowing smile of a man with yet another battle won.

Although Rooney’s subsequent performances were of the highest quality, reaching the zenith with that bicycle kick winning goal against City, he still looked like a player auditioning for a change to a better club that could fully utilize his talents.

For all is aptitude, he now seems to have the demeanor of a player that feels he is falling short of becoming one the world’s best. It must hurt for him to watch his old pal Ronaldo being named as one of, if not the best, footballer in the world.

2012/2013 saw Sir Alex sign RVP to bolster the team’s goal tally, as losing the league to City on goal difference the season before hurt us all. By the second game, Rooney was dropped to the bench in favor of RVP and by the end of the 2013 season – Fergie’s last – Rooney had all but outstayed his welcome. With Chelsea, PSG and Real Madrid sniffing around, it was clear that Fergie felt Rooney was once again fishing for another deal.

Their relationship hit rock bottom when Fergie announced that Rooney had handed in a transfer request, which Rooney vehemently denied. He asked not to play against Swansea in our final home game. It was a smack in the face for Fergie, and the look on Fergie’s face when he handed Rooney his League winner’s medal was one of a father bemused by his son’s behaviour.

By February 2014, Moyes made it clear Rooney was not for sale – he was once again offered a contract extension, this time keeping him at Old Trafford until 2019 for a massive £250,000 per week. He ended the season with 19 goals in 40 appearances; short of what we should expect from a player of his calibre, but this was a season not many came out of with distinction.

His performances for England, albeit scoring 41 goals in 96 appearances, have also diminished over time, and Wednesday’s lacklustre display as England captain was not the performance he would have hoped for in his first day in the new job.

Louis van Gaal’s decision to make him United’s captain also doesn’t seem to have lifted his spirits, and now with the signing of Radamel Falcao – a genuine goal-machine – Rooney must consider where he fits into the team under Van Gaal.

Maybe he has personal problems that we know nothing about, maybe he’s just burning out too soon, a bright flame that is painfully losing its dazzle. Who knows for sure, but I really miss that Rooney of 2010 – his best season yet, with 34 goals in 44 games.

Come back Wayne, all is forgiven.