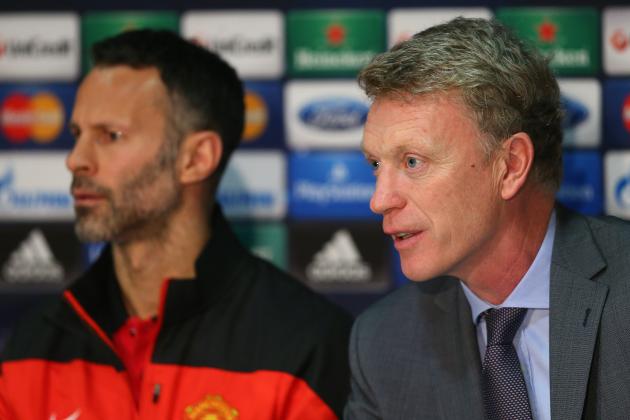 The rumours about a rift between Giggs and Moyes have been gaining momentum recently, and yesterday The Express reported that United’s number 11 will leave the club this summer, following “heated exchanges” over training and tactics.

Today, Giggs made a surprise appearance alongside Moyes at the pre-match press conference, as the club moved to silence the latest suggestions of disillusionment within the United ranks.

I’d question the authenticity of today’s show of unity. One man who was at the press conference claimed “it had the feel of Tony Blair sharing a stage with Gordon Brown.” When Giggs was asked directly about their working relationship, he said “there’s obviously no problem with the manager,” and Moyes chipped in with ““I am now doing his yoga sessions,” followed by some very self-conscious laughter and an excruciatingly forced, unnaturally lengthy grin. It was a study in awkwardness.

When RVP recently appeared to criticise Moyes’ tactics, and with the press repeatedly reporting the breakdown of their relationship, the Dutchman promptly gave an interview to the United Review where he told the world how great it was working with his new manager:

“I can tell you that Moyes’s sessions and the things he says in his team meetings are spot on. I really enjoy working under him and I’m absolutely convinced things will pick up and we’ll turn it around.”

Nothing about the statements he made in this interview felt natural. The whole thing felt like it was written by a press officer, or by Van Persie with a gun to his head. And with Giggs speaking to the press today, once again the impression was of an attempt by the Old Trafford publicity machine to regain control of the narrative and project a unified, harmonious image to the world.

An American reporter actually had the audacity to ask Giggs if he plans to take over from Moyes at United, but the press officer intervened before Ryan could respond. It’s only right there’s someone there to stop reporters openly making mischief in this way, but there is an overall sense of repeatedly desperate attempts to stage-manage the players and create an illusion of a team with total respect for, and belief in, their manager.

When you look at the mentality of the team on the pitch, that just doesn’t ring true. It’s worrying to think that our owners seem to have more faith in Moyes and his negative approach than a man that has represented our club with distinction for the past 24 years. Giggs has more medals than any other player in England, and he still knows how to pass the ball forwards – something the rest of the squad struggle with under Moyes.

It would be a completely inappropriate end to Giggs’ career if he did leave in the summer, having not been shown the respect his achievements and loyalty deserve. His marginalisation as a player was inevitable, and has been happening for years already, but if his views on tactics and training really are being ignored by Moyes, that’s a sad state of affairs, and you wouldn’t blame him for walking away.

Whatever happens, if he plays tomorrow against Bayern, it could be his last European game at Old Trafford, so let’s give him a legend’s reception and show him how much he means to us all.