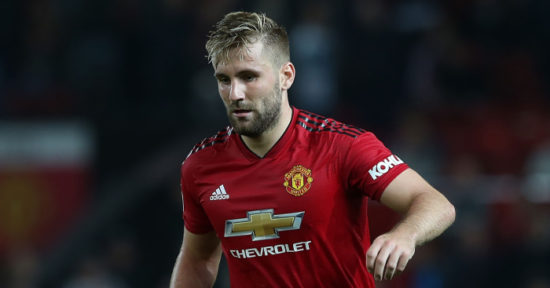 Manchester United left-back Luke Shaw has found himself in Jose Mourinho’s good books in a season when the Red Devils are performing badly.

Signed from Southampton on June 27, 2014, Luke Shaw was the testament that the legendary United defence was going to experience some serious overhauling.

On arrival at United, Ryan Giggs noted that Luke Shaw was “a very talented young left-back with great potential.” The £30m teenager excited many fans whose hopes had been down following a terrible season which saw David Moyes sacked.

Luke Shaw at Southampton showed the world just how much energy and quality he had on the left flank. He was destined to be the long-term successor of Patrice Evra, who held the spot for years with strings of amazing performances.

Despite all the funfair that surrounded his signing and arrival, Luke Shaw never looked like the player United signed from Southampton. His weight was regularly questioned as well as his drive, particularly by Jose Mourinho.

Before Mourinho’s arrival, Shaw’s problems at United had been written on the wall with former manager Louis van Gaal telling the press “Luke needs to be fit and he’s not very fit and can’t perform how I want.”

The defender who subsequently suffered a leg fracture in 2015 also had his attitude in question. Luke Shaw himself recently admitted that “I’d be lying if I said I didn’t sometimes think about stopping playing football, but I had a lot of good friends and family around me and they helped me through it, according to Goal.

It wouldn’t be amiss to think that these thoughts could have affected his confidence and attitude on the pitch. While he recovered from the fracture, Jose Mourinho still wouldn’t trust the Englishman to lead from the back.

The Portuguese manager said in 2016 “I cannot compare the way he trains with others. He is a long way behind.” Luke Shaw made just six appearances after that statement until the end of the 2016-17 season.

To document Luke Shaw’s struggles at United would require several pages of a book.

Having considered leaving the Old Trafford outfit in times past, the former Southampton defender chose to stay with United and fulfill his contract. That single decision is probably the best Shaw has made in recent times.

Following a stormy season at Manchester United where nothing seems to be working at present and players are performing below-par, Luke Shaw has been the most consistent player all season across all games.

Shaw said earlier this year: “I want to play as many games to help United” and he has been meeting his part of the bargain. His club manager said about extending his contract: “He will have his contract and he will be a United player for years.”

He has featured for United in all of their games in the League this season, making the left back position his own. There are reports that he has entered negotiation with the club over a new deal. Rightly so, he deserves an extension.

Luke Shaw is more than a talented football player; he is an epitome of how a player can turn his story around and we expect him to hit his peak soon.