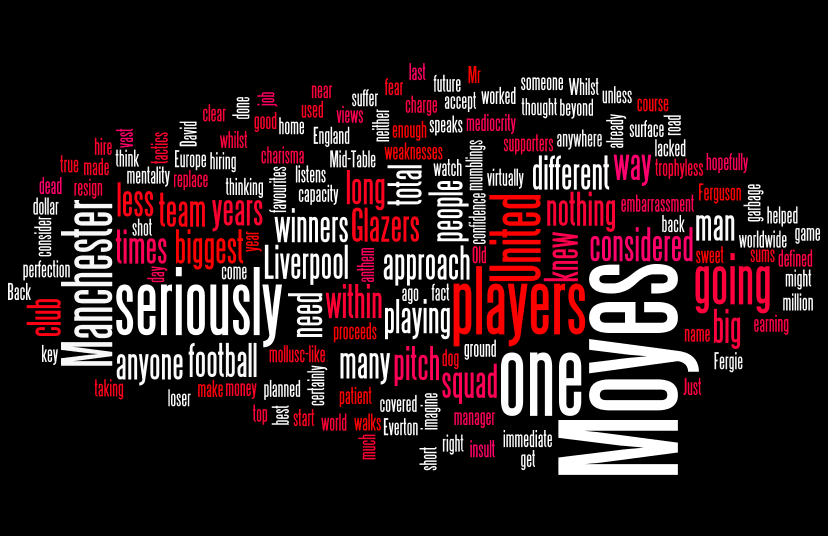 I will make this short and sweet, as I have covered this ground many times already. In fact, I said it 2 years ago when mumblings of Moyes taking over started to surface, and I couldn’t believe that he would be seriously considered for the biggest job in football. Back then, I made my views very clear to the people I know within Old Trafford.

Just what were Ferguson and the Glazers thinking? You have a squad of players, all earning vast sums of money; most importantly, a squad of winners. Of course, the players need to have a winning mentality from the start, but they were being driven by a man that would accept nothing less than the best. We knew we had weaknesses; we knew we didn’t have a true leader on the pitch, but what we lacked on the pitch we most certainly had off of it.

Then, in walks Moyes. You can imagine the players’ reactions, going from playing for the biggest club in the world, for the greatest, most demanding manager, to Mr Mid-Table – the perennially trophyless Moyes. He then proceeds to replace all those key staff, who have helped shape these lads into winners, with a team defined by mediocrity. In less than a year, he has virtually dismantled a dynasty.

How could they have seriously thought this was going to work? You need big people with big personalities at Manchester United – David Moyes is neither. When he speaks, no one listens. He has the charisma of a dead dog. Whilst that might have worked at Everton, did anyone stop to think about who he was replacing? When Moyes says Liverpool are favourites, he means it; Fergie would have used it in a different way. From day one, Moyes’ whole approach with the media has been negative – the approach of a loser.

Sunday was a total embarrassment. Liverpool had the tactics planned to perfection, whilst our mollusc-like midfield couldn’t get anywhere near them. We had one shot on target in a home game! How much more of this total garbage do we have to suffer?

Can anyone name one top team in England or Europe that would seriously consider hiring Moyes once he is hopefully out of Manchester? I would bet my last dollar not one of them would hire him, unless it’s in a different capacity within the club. So why is he considered good enough for Manchester United?

I seriously fear for our immediate future if nothing is done. We can be patient with the right man in charge; someone who gives us confidence that he knows what he is doing, and has the players playing football the Man United way, but to have to watch this beyond May will be an insult to 650 million supporters worldwide.

If he doesn’t resign, and the Glazers stick with him, it’s going to be a long, long road back, and ‘20 times’ will be the anthem for many years to come.